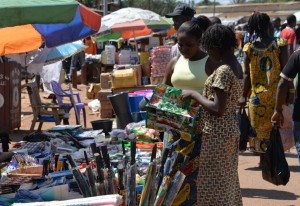 Johannesburg (AFP) – More than one in three Africans have entered the middle class in the past decade, and their numbers are set to swell thanks to rapid economic growth, a study showed Monday.

At least 370 million Africans, or 34 percent of the continent’s 1.1 billion people, are now middle class, according to a survey by the African Development Bank.

By 2060 the group should represent 42 percent of the population, according to the study launched in Johannesburg nearly 20 years ago. “There is a stable middle class and it is growing,” said Mthuli Ncube, the AfDB’s chief economist and a senior research fellow with Oxford University’s Blavatnik School of Government. “It is a big driver for investment in Africa,” he added at a news conference in Johannesburg. The International Monetary Fund forecasts that Africa’s economic growth, boosted by rising investment in natural resources and infrastructure, will reach 5.1 percent this year, up from 4.7 percent in 2013. It should climb to 5.8 percent next year, the IMF predicts. The study, which defined the middle class as having a purchasing power parity of between $2.20 and $20 (15 euros) a day, found that the middle class is strongest in countries with a robust and growing private sector. North Africa leads the pack with at least 77 percent of its population counted among the middle class, surprisingly followed by the central African region with 36 percent of its people falling in that category — though many are considered to be vulnerable. The southern African region, home to the continent’s most developed economy, South Africa, is in third place, level with west Africa with around 34 percent of their people classified as middle class. East African countries are at the bottom of the ranking, having just a quarter of their nationals in the middle class. – ‘Middle class syndrome’ – Consumption and ownership of items such as a television set, car and refrigerator, and the type of flooring in dwellings were among the yardsticks used to define the class. Other measurements included access to electricity, sources of drinking water and types of toilets. Based on a survey of 37 African countries, the study polled nearly 800,000 households and concluded that most of the countries saw a rise in the size of the middle class over the past decade. Ownership of cars and motorcycles has jumped by 81 percent in Ghana. “Africa’s middle class has increased in size and purchasing power as strong economic growth over the past two decades has helped reduce poverty,” said the report titled ‘The Emerging Middle Class in Africa’. But many in the new middle class struggle to save for the future amid the consumption boom. Johannesburg-based author and development activist Tsitsi Musasike said the so-called “middle class syndrome” of people who are “perpetually broke living from pay check to pay check” will have to end and they must embrace the culture of saving. “The reason why most people don’t have that discipline is that, at a very early age, we were never taught how to budget,” she told AFP. The AfDB report also revealed that South Africa’s black middle class has surpassed the white middle class thanks to government’s affirmative policy to empower blacks who were discriminated under apartheid.

Even countries ranked among some of the poorest, such as Sierra Leone, do boast of a “small but growing” middle class composed of mainly the educated elite.

Nigeria’s middle class is growing especially alongside the expanding banking and telecommunications sectors, it said.