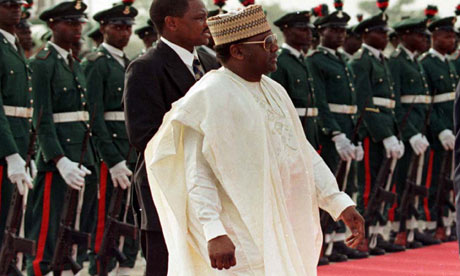 General Sani Abacha in 1998. After he died, his wife was caught trying to leave the country with 38 suitcases stuffed with cash. Photograph: Reuters[/caption] Nigerian police have recovered a stash of gold and diamond jewellery worth thousands of pounds from robbers who targeted a home of the country’s most notorious former dictator. Officials in arid Kano, in northern Nigeria, said four men swiped $125,000 (£77,000) of jewellery last year – a staggering 20m naira in local currency, or 100 years’ income for the average Nigerian – after raiding one of many sprawling, lavish homes of the former military ruler Sani Abacha. “We are still investigating. Not all the stolen jewellery has even been recovered,” said a Kano police inspector, Ibrahim Idris, as officials displayed a glittering pile that included two dozen gold necklaces and some 40 pairs of gold earrings. The greed of Abacha, who ruled for five years after a 1993 coup, shocked even Nigerians used to plundering on a grand scale. He is believed to have stolen $4.3bn while in office. In one case, he was accused of gutting a $500m state-owned steel plant. The tradition has continued as Nigeria’s oil wealth continues to be looted. In April, James Ibori, an influential governor, was jailed in the UK for looting $250m over eight years. The Abacha family have largely lain low since the short, flamboyant general died of a heart attack while cavorting with Indian prostitutes. As his death sparked an outpouring of jubilation, his wife Maryam was caught trying to flee the country with 38 cash-stuffed suitcases. A $5m Peace Foundation set up by the family, intended to sell “Abacha-themed” televisions, sandals, rice and soap, later , went bust. “That amount of money spent on jewellery is just confusing. What exactly was he doing to earn that kind of money? And how can anyone spend so much on jewellery?” asked Muhammadu Bello, a local trader whose annual income is about $1,200. A push to recover $4bn squirrelled away into the family’s private accounts in Switzerland forced the tax haven to relax banking secrecy regulations after landmark rulings. In 2006, the Swiss authorities returned $500m to Nigeria – the first time European banks had returned looted money to an African country. Nigeria’s anti-corruption agency estimates about $400bn has been siphoned off from the oil-rich country into private pockets since 1960. Globally, developing countries lose up to $40bn a year through corruption, according to the World Bank. *Source theguardian]]>