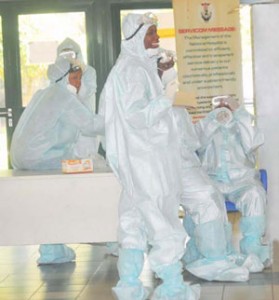 HEALTH PERSONNEL IN PROTECTIVE KITS AT THE NATIONAL HOSPITAL IN ABUJA ON TUESDAY –[/caption] Stunned by the entrance of the Ebola Virus Disease, EVD, into America, the United States’ Center for Disease Control and Prevention has despatched its personnel to study how Nigeria contained the killer disease. The US reported on Tuesday that it has discovered a case of EVD in Dallas, Texas, but its health officials said “the crisis is under control and the public has nothing to fear.” A statement released by US CDC Director Tom Frieden said “it’s clear the nation needs a quick and thorough response to its first Ebola patient” He said although Nigeria was not completely out of the woods, “their extensive response to a single case of Ebola shows that control is possible with rapid, focused interventions.” Apart from Nigeria, the US will also visit Senegal to study its model. Frieden said “the best practices in Nigeria and Senegal suggest the U.S. should monitor all individuals who may have been exposed to Ebola and establish a dedicated management and response system.” Senegal has had no new reported cases of Ebola since Sept. 18 while Nigeria has not reported new ones since August 31, US health officials are expected in Nigeria which it claimed had the best practices in combating Ebola Virus disease which entered into Nigeria through Liberian born American citizen Mr. Patrick Sawyer whose index case was reported on July 20, 2014. Nigeria is expected to officially announce today that the remaining two potential Ebola patients will exit the 21-day observation period. How Nigeria stopped the spread of Ebola According to US CDC, “Nigeria’s first reported case of Ebola surfaced July 20, when Patrick Sawyer landed in Lagos from Liberia and exposed 72 other passengers to the virus. Nigeria’s Health officials quickly issued notifications and tracked everybody who may have been in contact with Sawyer.

“Nigeria also established an Ebola Incident Management Center to handle the potential outbreak and developed a staffing plan that executed a social mobilization strategy that reached more than 26,000 households of people living around the contacts of Ebola patients,” The deadly virus has killed more than 3,000 people in Sierra Leone, Guinea and Liberia in the largest outbreak ever recorded. How Senegal contained Ebola Senegal confirmed its first Ebola case Aug. 29 after a man, travelling from Guinea on Aug. 14, took ill and showed symptoms of the disease. This prompted a quick response, including an experienced and trained staff that was prepared to contain the Ebola outbreak. The procedure led to the identification of 67 contacts who were placed under quarantine, monitored for 21 days and showed no symptoms of Ebola. Panic in America The man who imported Ebola into US was found to have travelled to Liberia without informing the authorities and did not disclose the nature of his ailment to the nurse that attended to him. Reports from Texas yesterday said that the Nurse who attended to the man has also taken ill for Ebola in Texas. A spokesman for Texas Health Presbyterian said the patient had walked into a Dallas emergency room on September 26, without knowing that he contacted the deadly virus and left after he was treated. He then returned to the facility on September 28 where it was determined he likely had Ebola and was isolated. He tested positive Tuesday, health officials said. Following the lapse on the part of the hospital officials, questions are being asked amid panic across the country. The CDC has thus advised that all medical facilities should ask for patients with symptoms consistent with Ebola for their travel history. *Source Vanguard ]]>