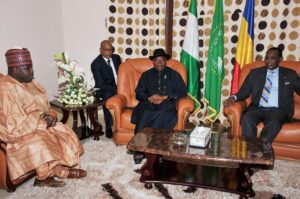 Days after Nigeria’s military raised hopes with the announcement that Islamic extremists had agreed to a cease-fire, Boko Haram still is fighting and there is no word on the fate of 219 schoolgirls held hostage for six months.

Officials had said talks would resume in neighboring Chad this week, but there was no confirmation that those negotiations had resumed by Wednesday.

The official silence raises many questions, especially since Boko Haram’s leader Abubakar Shekau has not confirmed that a truce has been agreed.

Relatives of the girls abducted from a boarding school in northeastern Chibok town said they are confused but trying to be hopeful.

“Things are still sketchy with lots of holes and varying statements,” Allen Manasseh, a brother of one of the missing schoolgirls, told The Associated Press by telephone. Manasseh said he relentlessly scours the news headlines to find out when his sister, Maryam, may return home.

Despite the cease-fire announced by the military on Friday, the Islamic insurgents have attacked two villages and a town in the northeast and raised their flag in a fourth village. People who escaped this week from Bama, a town in a part of northeastern Nigeria where Boko Haram has declared an Islamic caliphate, say hundreds of residents are being detained for allegedly breaking the group’s strict version of Shariah law. Residents who got out of Bama said so many people have been detained by Boko Haram that the local jail is overcrowded and houses are being used as makeshift prisons. Many young men have been forced to join Boko Haram, and those who refuse are killed, said those who ran away. [caption id="attachment_13039" align="alignright" width="300"] 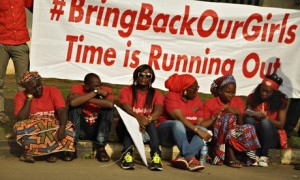 Members of the Abuja Bring Back Our Girls group during a protest march to commemorate six months since the abduction of the 219 Chibok schoolgirls. Photograph: Afolabi Sotunde/REUTERS[/caption] People are jailed after brief “trials” for infringements like smoking cigarettes, said Amina Bukar, a middle-aged woman who said she hiked through the bush for five days before reaching Maiduguri, the Borno state capital 75 kilometers (nearly 50 miles) away. Food is running short since shops have been looted by Boko Haram, said Bukar. “Water also is very scarce, sometimes you line up (at the communal tap) for 24 hours,” she said. In Nigeria’s capital, Abuja, dozens of activists continue a daily protest ritual at Unity Fountain, using the hashtag #BringBackOurGirls to demand that the government and military ensure the release of the students. Campaigner Aisha Yesufu said they had been told the girls would be freed on Monday, but it didn’t happen. “The government spokesperson came out and said that they never said Monday, that they are saying this week. We are still watching. We are extremely anxious,” she told the AP. Some 276 girls and young women writing science examinations were kidnapped from a government boarding school in Chibok in the early hours of April 15. Dozens escaped by themselves in the first couple of days but some 219 remain missing.

Thousands of people have been killed and hundreds of thousands forced from their homes in the 5-year uprising to establish an Islamic state in Nigeria, Africa’s most populous nation of some 160 million people divided almost equally between Muslims and Christians.