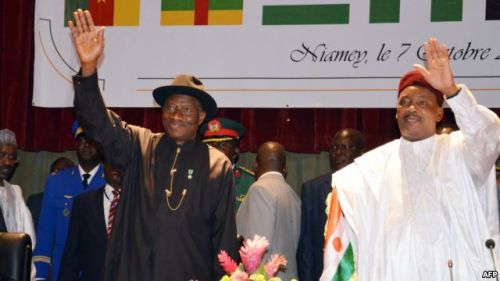 Nigeria’s President Goodluck Jonathan has welcomed the support provided by regional leaders in his country’s efforts to combat the Islamist militant group Boko Haram, according to presidential spokesman Reuben Abati. His comments came following a meeting with an envoy of Gabon’s President Ali Bongo Ondimba in the capital, Abuja. In a message delivered by the envoy, Gabon’s leader pledged his government’s support as well as that of the countries in the Central African region to Nigeria in the fight against terrorism, according to Abati. “The president made a statement that this is the way to go because terrorism is something that requires cooperation and solidarity and collective action. This again is consistent with the outcome of the meeting in Niamey, which is a meeting Nigeria and its neighbors taking an assessment of the security situation and seeking to define a common strategy in the fight against terrorism within the region,” said Abati. Regional leaders met in Niger’s capital, Niamey last Tuesday for an extraordinary summit of heads of state and government of the Lake Chad Basin Commission to discuss terrorism in the region. Countries in the Lake Chad Basin Commission include Nigeria, Chad, Niger and Cameroon. The leaders, Abati said, reviewed ongoing collaboration against terror attacks and agreed on joint action to further curb insurgency within and across their national boundaries. “What the meeting did was to further reinforce the need for personal and intelligence capabilities, and coordinate the effort of an existing multinational joint task force in the Lake Chad basin,” said Abati. “The leaders committed to establishing the headquarters of the multinational task force, defining a common strategy, they reaffirmed their cooperation and their resolve to fight terrorism together.” “They have directed their ministers of foreign affairs and the ministers of defense of all the countries of the Lake Chad Basin Commission and Benin to meet [in] November, to draft a common resolution, which will be forwarded to the United Nations Security Council, in order to put in place a legal framework for cross border military operations against Boko Haram,” said Abati. The Lake Chad Basin Commission was established in 1964 to manage shared water resources of the Lake Chad Basin and promote regional integration, peace and security. Some security experts have expressed concern about the lack of commitment from Nigeria’s neighbors to help fight Boko Haram militants in spite of the promises made at the summit in Niger. Abati disagreed, saying the leaders have demonstrated a commitment to fight terrorism following a meeting in Paris earlier this year hosted by French President Francois Hollande. “African leaders have been meeting regularly on this issue of terrorism and you can see a lot of cooperation, a lot of joint effort across the continent to combat terrorism,” said Abati. “At the last meeting in Niamey for example, further commitments were made that the various countries should contribute a battalion each, which is a follow up to the meeting that was held in Paris.” During the Paris talks, Hollande said Boko Haram has become a threat to all of West and Central Africa and a “comprehensive plan” must be established to fight it. *Courtesy of Reuben Abati]]>