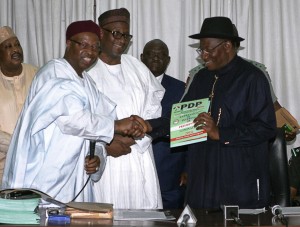 Jonathan appeared at a brief ceremony at the headquarters of his Peoples Democratic Party (PDP), where he collected a nomination form for the PDP presidential ticket.

He has so far no opponents in the party’s primaries and is therefore virtually guaranteed to be on the ballot for the February polls.

“First, let me thank God for today,” the 56-year-old leader of Africa’s most populous country and top oil producer said.

“Let me thank the leadership of our great party and all members of our party for believing in me,” he said, noting how they raised the funds for his nomination.

Little is known about Jonathan’s personal wealth, although his office demanded a retraction from a website earlier this month that put his net worth at $100 million.

There have been numerous reports that a key contender to challenge Jonathan, ex-military ruler Muhammadu Buhari, also needed help to raise the hefty nomination fee for his All Progressives Congress party.

Jonathan’s staggered re-election announcement — without any direct declaration from his own lips — has been described as drawn-out by some commentators.

It began with news from his office on October 23 that he had decided to run, followed by a statement announcing his plans to collect the nomination form.

A list of his re-election team with more than 200 names was then printed in leading newspapers.

The re-election announcement process is expected to culminate with a public event on November 11, organised by the Presidential Declaration Committee headed by former defence minister Bello Haliru Mohammed.