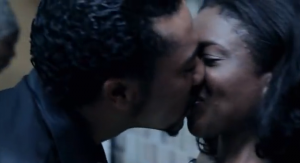 Ghanaian actor, Majid Michel and Nigerian actress, Beverly Naya have emerged as the best kissers in Nollywood. The handsome actor and beautiful actress combined well enough to emerge joint winners in the Best Kiss in a movie category at the just-concluded 2014 Best of Nollywood awards. The awards ceremony, which held in Port Harcourt on Thursday, October 16, 2014, saw the two named winner for their passionate and intense kissing in a movie titled Forgetting June. To emerge winner of the category, Majid and Beverly beat the likes of Ini Edo, Blossom Chukwujekwu and Monalisa Chinda to win the award.Presenting the category, which many in the movie industry consider either unserious or unique, for this year were Empress Njamah and Chinedu Ikedieze at the awards ceremony. Directed by Ikechukwu Onyeka and starring Majid Michel, Beverly Naya, Mbong Amata and others, Forgetting June is a 2013 Nigerian romantic drama film. *Source Ghana Vibes]]>