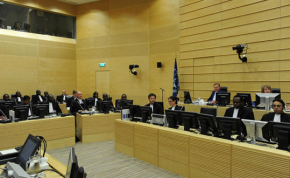 Photo: Thijs Bouwknegt/RNW
International Criminal Court in the Hague (file photo).[/caption] A Kenyan solidarity delegation of around 140 MPs and senior government officials is likely to be locked out from President Uhuru Kenyatta’s ICC courtroom hearing in The Hague on Wednesday. That includes a group of 16 religious leaders, a gospel singer and young and elderly Kenyans. The Star has established that few in the entourage them will be admitted to the court’s two public galleries because of limited seating. Together they accommodate 150 people. Separated from the court itself by soundproof, bulletproof, one-way glass, the galleries are intended for journalists, diplomats, NGOs and interested parties. This means enthusiastic lawmakers and even Cabinet Secretaries will have to follow the proceedings of Uhuru’s status conference on television from their hotel rooms. Many Kenyan lawmakers and the African Union see the ICC case against Uhuru and the summons for him to appear as an affront to the nation and the President’s office. The AU urged him not to go. Uhuru faces five counts of crimes against humanity for allegedly orchestrating the 2007-08 post-election violence. He denies all charges. Deputy President William Ruto and former broadcaster Joshua Arap Sang separately face similar charges. Uhuru was charged as a individual, not as a head of state, but he will be the first sitting head of state to appear in court as an accused. He was summoned to appear in person for a status conference to discuss his forthcoming trial, already postponed several times. The prosecution complains the Kenyan government has not complied with requests for Uhuru’s financial, communications and property records. Prosecutor Fatou Bensouda wants the case adjourned indefinitely until the Kenyan government supplies the information. Uhuru’s lawyers say the case is nonexistent and want it dropped altogether. By last evening more than 140 MPs had filed visa applications with the Netherlands Embassy and notified the Speaker of their intention to travel to The Hague. Uhuru will address a joint session of all lawmakers on Monday at 3pm in the National Assembly, on the eve of his Hague visit Ugandan President Yoweri Museveni and his Rwandan counterpart Paul Kagame denied reports that they would also fly to The Hague in solidarity with Uhuru. Museveni’s office denied reports that Ugandan Independence Day on October 9 was cancelled so the President could be in The Hague. Yesterday, the ICC said it has not received a formal request from Kenya for reserved seats at the hearing. It emphasised the limited seating. “The Embassy of Kenya in The Hague, The Netherlands, is the official channel of communication for delegations or persons from Kenya that wish to attend the hearing,” the Court’s Public Affairs Unit said. Yesterday many lawmakers and officials, including Lands Minister Charity Ngilu, were camped since early morning outside the Dutch Embassy in Nairobi yesterday to get their visas. The number is likely to swell, owing to the president’s elaborate security detail and a coterie of advisers. Flamboyant Nairobi Senator Mike Sonko said he will sponsor 16 people to accompany Uhuru to the ICC. “I need three young guys and three young ladies (at least one gospel singer), six religious leaders from different denominations and four elderly men and women,” Sonko announced. Conflict is possible, given the huge Kenyan entourage, the huge international press corps and large number of other interested parties. Anticipating a crunch, The Hague officials said those wishing to attend the hearings should make requests via email. “given the expected high attendance for these hearings, individuals who have not received a confirmation email in advance cannot be guaranteed access to the hearings,” the ICC said in a statement. In September last year, drama unfolded as Dutch police ejected Kenyan lawmakers from the entrance to the ICC building where they had lined up to pray for Deputy President William Ruto. The officers directed the MPs to wait for Ruto and co-accused Joshua Arap Sang across the road, at least 20 metres away. A heated exchange ensued. Inside the public gallery, lawmakers previously have found themselves at odds with security officers over ICC rules of decorum. They state: “Talking among one another, loud noise and boisterous or abusive conduct or any other activity that may disturb Court sessions or other visitors is forbidden.” If the court goes into closed or private session, visitors must remain silent and follow instructions from security officers. Visitors are not permitted to point or gesture at anyone in the courtroom. Reading newspapers, books and journals is banned in the public galleries *Source Allafrica/The Star .]]>