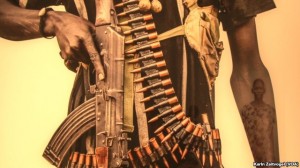 The image of a Dinka woman is reflected in the arm of a Nuer fighter in this photograph from U.S. photographer Tim Freccia’s series on South Sudan, “Life and Death.”[/caption] Around a month ago, American photographer Tim Freccia ran into South Sudan Information Minister Michael Makuei in Juba. “The Minister of Information walked up to me in a hotel and asked me if he knew me, and if I had been in Malakal,” Freccia told South Sudan in Focus. Freccia had been in the Upper Nile state capital, but he told Makuei otherwise. He told his outright lie because Makuei has said that journalists who “disseminate material of the rebels in the country are agitating the people against the government,” and when Freccia was in Malakal, he embedded briefly with the White Army and took pictures of its anti-government fighters. Those pictures were part of an exhibition, called “Life and Death,” at a New York gallery. http://www.youtube.com/watch?v=5QO6V16TvOI The eyes of the subjects of the seven-foot-tall images of Nuer White Army warriors and Dinka cattle herders follow visitors as they wander through the Ricco Maresca gallery in New York’s Chelsea neighborhood. The White Army fighters carry AK47s and wear belts of ammunition like jewelry. The Dinka cattle herders from Yirol, a village in Lakes state, are clad in traditional tunics, some more eye-catching than others. 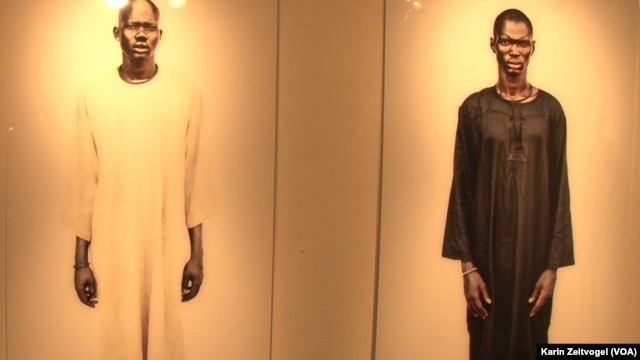 Two cattle herders from the Lakes state village of Yirol who posed for American photographer Tim Freccia and feature in Freccia’s “Life and Death” exhibit.
“I drove through Yirol during a time of year when the men come from the cattle camps and literally pose in the streets, looking for wives,” Freccia said. Freccia hung a white sheet from a mango tree in Yirol and snapped pictures of the hopeful husbands-to-be. But one of the pictures is different. “She is the only woman,” Freccia said. The image is his personal favorite in the series. 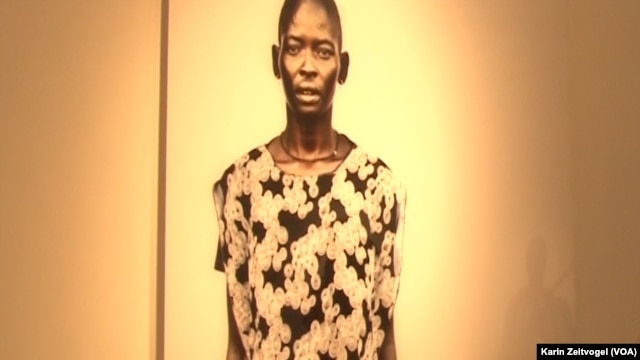 The only woman in the series of photographs that make up “Life and Death” by US photographer Tim Freccia.
“That was in Yirol. I grabbed her because I thought she was striking and got her to stand in front of the backdrop and, just as I pushed the shutter release, a man reached in to grab her and pull her out,” he says. The man’s hand can be seen on the lower right side of the picture of the woman. The pictures of the White Army fighters were shot three years after the Yirol photos, during the current fighting in South Sudan. “They are portraits  of the Nuer White Army as they attacked Malakal, sometime in February of this year,” Freccia said. “One guy has a spear, the other guys are armed with assault rifles, PKs. That was as they sacked a strategic town.” 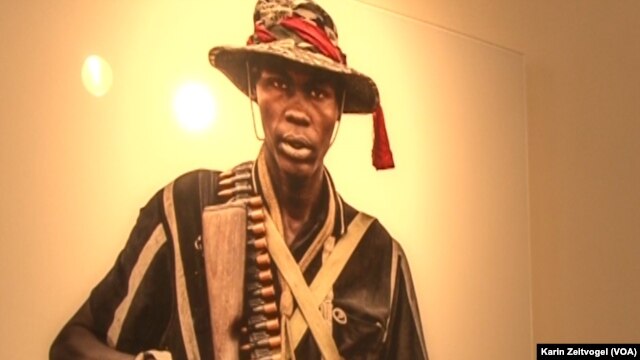 A member of the White Army in South Sudan, photographed by Tim Freccia sometime in February 2014 near Malakal.
It is possible that Freccia’s portraits of the White Army could be interpreted as hostile propaganda by the government of South Sudan, but the photographer insists that he is not trying to get a political message across with the images. “I’ve had some discussions with people who think I’m glorifying the rebels — or glorifying something — and my thought here, my intention is to remove as much information as possible,” he said. “I mean, one of the points of this collective body of work is to look at the subjects rather than the environment. To be perfectly honest, in my opinion, both sides are equally guilty of inhumanity,” Freccia said. 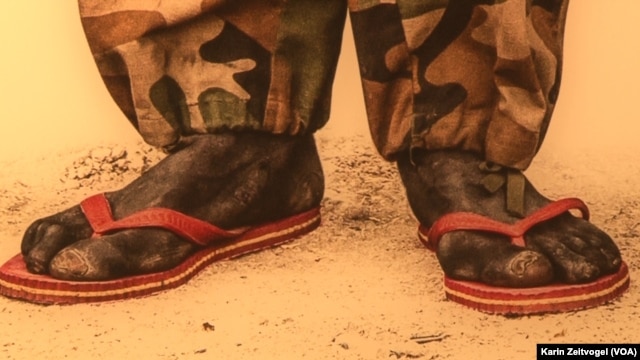 A White Army soldier in South Sudan who fights in flip-flops.The image is part of US photographer Tim Freccia’s “Life and Death” series on South Sudan
Freccia says although he was able to talk his way out of what could have been a tight spot when he met Makuei in the hotel lobby, South Sudan is fairly safe for foreign reporters. But, he added, he is concerned by what he and media rights advocates say is a crackdown on the rights of local journalists since South Sudan plunged into conflict in December last year. “I have a good number of colleagues — local journalists who are working in South Sudan — and they’re suffering. They’re being intimidated or arrested or even beat up,” he said. International media rights group, the Committee to Protect Journalists, said recently that it knows of at least 10 journalists in South Sudan who have been harassed of threatened with arrest because of reporting they have done since the conflict began in December. A reporter in Wau, in Western Bahr el Ghazal state, has not been heard from by his family since the security forces took him into custody in early August. The reporter, George Livio, has not been charged with any offense, but the CPJ’s East Africa representative, Tom Rhodes, said that Western Bahr el Ghazal state information minister, Derrick Alfred, told the media rights group that security agents monitored Livio’s communications and accused him of collaborating with rebels. Freccia said he has no intention of returning to South Sudan anytime soon. *Source VOA]]>