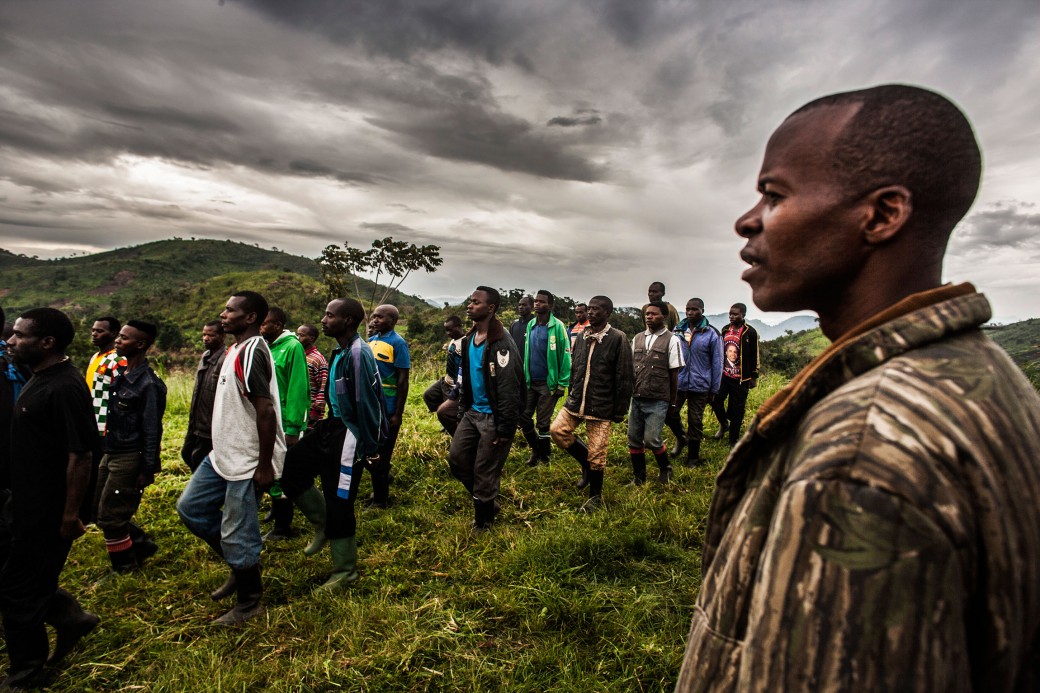 Ghosts of the genocide remain potent obstacle to peace 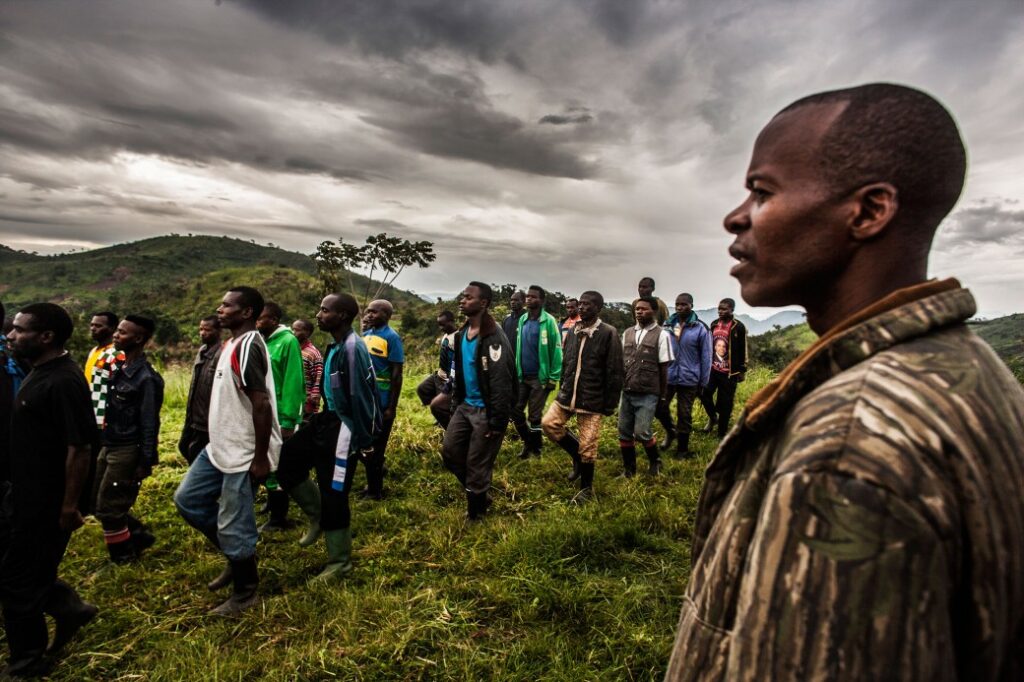 IHULA, Congo — Gervain Ndayizeye is too young to remember Rwanda’s genocide, but 20 years later he’s filled with the hatred it unleashed. Last year, an ethnic militia linked to Tutsi rebels hacked to death his ethnic Hutu parents, two younger brothers and sister with machetes. That pushed Ndayizeye to join the Democratic Forces for the Liberation of Rwanda, the Rwandan Hutu militia known by its French acronym FDLR, whose founding leaders helped spearhead the genocide. Over the past few months, driven by a thirst for revenge, Ndayizeye has learned to wield a Kalashnikov rifle and other weapons. He’s also learned to despise Rwanda’s President Paul Kagame, a Tutsi. Above: Members of the FDLR, a Rwandan Hutu militia whose founding leaders helped coordinate Rwanda’s genocide, sing patriotic songs on a hilltop base near the village of Ihula, eastern Congo. “Tutsis are people who follow Kagame’s ideology. They are not good people,” declared Ndayizeye, now 20, whose hair was buzz-cut like a rap star and wore a T-shirt emblazoned with President Obama’s visage. Of all the militias that have plagued the Congo, none has nourished Africa’s deadliest war like the FDLR. They are a key reason, some say a pretext, for Rwanda’s backing of Congolese rebel groups. Many eastern Congolese believe the conflict in their country will end only when the Rwandan Hutu exiles leave. But over the years, various military and diplomatic efforts have failed to defuse the FDLR. Now, in the U.N.’s most aggressive effort in years, a combat brigade is backing the Congolese army to take down the FDLR. The obstacles to this endeavor, though, became clear during visits with FDLR commanders, political officials and Rwandan Hutu refugees in the hills of eastern Congo. RELATED: In Congo, trapped in violence and forgotten. When fighting flares in Congo, ‘the school shuts down.’ The turns in a warlord’s life, and in Congo’s war. Last year, U.N. and Congolese forces defeated the Tutsi-led M23 rebels, who fought a mostly conventional war. But the approximately 2,000 FDLR fighters have been more difficult to quell because they wage a guerrilla struggle, where wearing civilian clothes and living among and marrying locals are strategic weapons. Their leaders make no pretense that they use civilians as human shields. “Our philosophy, and our secret, is to hide ourselves,” said Enock Dusabe, 63, a top FDLR political operative. “When they go after us, they will go after the Congolese population.” More than 800,000 people, mostly ethnic Tutsis and moderate Hutus, died at the hands of Hutu extremists during Rwanda’s genocide in 1994. As the carnage was ending, hundreds of thousands of Hutus fled into neighboring Congo fearing revenge attacks, including Ndayizeye’s family and the “genocidaires” who later formed the FDLR. Members of the FDLR, who wear civilian clothing and often live among locals as part of their guerrilla-style technique, train at the group’s base in Ihula, eastern Congo. In the hierarchy of Congo’s warring groups, the militia is considered among the most brutal. Its fighters have slaughtered and raped, torched countless villages and forced children to fight, according to victims and human rights groups. Several top leaders are either wanted by the International Criminal Court at the Hague, under arrest or on a U.N. sanctions list. Today, FDLR fighters keep a low profile in Kivuye and surrounding villages, moving in small groups and mixing with locals. It has helped them to avoid capture by government forces or the Tutsi armed groups, and Kivuye’s warlords have been careful not to antagonize them. On a recent day, Dusabe and two other senior FDLR officials arrived in Bweru, the next village south of Kivuye. Scores of Hutu residents, including many FDLR members, came out to greet them. Dusabe and his colleagues were not worried about the U.N. peacekeepers and Congolese soldiers nearby. When the Tutsi-led rebels controlled the area, the FDLR fought alongside the Congolese army. In this area, that alliance still counts. “We pass where they are. And they pass where we are,” said Theoneste Maisha, 42, another senior FDLR official. “Nobody attacks each other.” Moments earlier, before the conversation began, Dusabe led a prayer thanking God for giving the militia “strength and intelligence.” A few minutes later, he delivered a message from the militia’s top leadership: After 20 years on the run, they are ready for a political settlement. They would disarm if they could return to Rwanda with all rights and freedoms. Was the militia tired of fighting, or was this a tactic to stop the U.N. from hunting for them? Either way, the ghosts of the genocide remain a powerful barrier to peace in eastern Congo. Kagame has said publicly that he will not negotiate with the FDLR. At the militia’s defense post in Ihula, a village half a day’s walk from Kivuye, 138 Rwandan Hutu families live in an encampment on a hill. They follow the militia wherever they move, seeking their protection, but also unwittingly serving as human shields. Most expect to live out their lives in Congo. “Returning to Rwanda is like committing suicide,” said Edouard Irambona, 39, a Rwandan Hutu community leader. “We fled Kagame killing us. He followed us into Congo to kill us.” Below in the village, uniformed national policemen nod in respect at FDLR fighters. When a journalist arrived, Congolese elders angrily demanded to speak first, as per tradition. They were quickly hushed up by the Rwandans. None of the militiamen carried weapons on this day. But they said they were prepared for a possible attack by the U.N. and Congolese government forces. “Evil will never prevail over what is good,” said Lt. Col Bob Morane, the militia’s regional commander, who uses a nom de guerre. “We will survive.” *Source Washington Post]]>