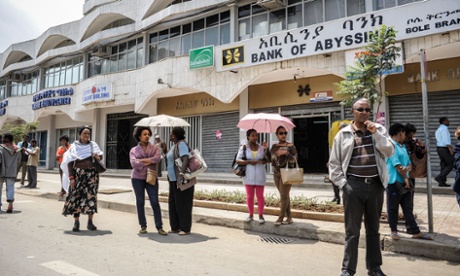 People wait for a bus in Addis Ababa. The government has launched an ambitious modernisation plan in the Ethiopian capital. Photograph: Giorgio Cosulich/Getty[/caption] It is now three decades since Ethiopia experienced the infamous famine that cost the lives of more than a million people. The tragedy prompted the BBC’s Michael Buerk to describe it as “a biblical famine in the 20th century” and “the closest thing to hell on Earth”. In sharp contrast with that devastating poverty, Ethiopia is now widely considered to be one of a pack of “African tigers”, with ambitious plans to become a middle-income country by 2025. The nation has, “like the proverbial phoenix, managed to rise from the ashes to become Africa’s fastest-growing non-energy-driven economy”, a senior tax adviser at KPMG Kenya recently noted. The changes that have taken place in Ethiopia since the 1984 famine are commendable. Despite some dispute over the figures, there is consensus that Ethiopia has registered impressive economic growth for the past decade of somewhere between 8% and 10%. One effect of the progress is a greater capacity to cope with drought, preventing the descent into famine conditions that have occurred in the past. Ethiopia’s development efforts are also praised internationally for meeting some of the millennium development goals, particularly universal primary education and a reduction in infant mortality. The government’s investments, the main engine of growth, abound, from building a road network to expanding basic social services, and making a big push in the energy sector. The Grand Ethiopian Renaissance Dam on the Blue Nile, an impressive, self-funded hydropower project heralding the country’s rebirth, will be the continent’s largest upon its completion in 2017. Changes are equally visible in trade and investment. Exports have diversified and the country has become a major shipper of oil seeds, flowers, gold and, increasingly, textiles and leather products. This has been enabled by a steady growth in foreign investment, particularly into floriculture and manufacturing. It is indeed astonishing to see Ethiopia fast becoming a popular destination for global giants such as Chinese shoemaker Huajian and H&M, the world’s second-biggest clothing retailer. The spectacular change in Ethiopia has been enabled by the relative peace and stability it has enjoyed over the past two decades, which in turn has allowed its regional diplomatic influence to increase. Although there are still low-level insurgencies in some parts of the country, the ruling coalition has generally governed effectively. This has been buttressed by its allocation of more than 60% of the national budget to sectors of the economy, such as agriculture, education and health, that favour poorer people. Its predecessor spent most of the treasury’s coffers on the military. Ethiopia’s big push, like previous surges by the “Asian tigers”, also has costs that cast doubt on its sustainability. Although the government labels it a “democratic developmental state”, the political-economic order that the ruling Ethiopian People’s Revolutionary Democratic Front follows resembles those Asian models, which delivered rapid economic growth in an authoritarian environment. Yet unlike nations such as Singapore and China, whose economic transformation occurred within a closed political system, the EPRDF operates in what is formally a liberal democracy. This ideological entanglement has created structural tension, evident in the restrictions on political and civil rights that are, in theory, enshrined in the constitution. Growing economic inequality also threatens to undermine the political stability and popular legitimacy that a developmental state acutely needs. Who benefits from economic growth is a much-contested issue in contemporary Ethiopia. Although the government argues that the suffering caused by rapidly rising living costs is a transient phenomenon inherent in developing economies, the emergence of new economic elites through rentier activity and clientelism has exacerbated the sense of relative deprivation, particularly among urban poor people. Additionally, Ethiopia’s economic ambition has a cost for sections of its huge rural population. The country’s five-year growth and transformation plan, begun in 2010, includes tapping into the “abundant extensive land” in the lowlands for large-scale commercial agriculture. These peripheral areas – such as South Omo and the Afar region – are where ethnic minorities with a weaker political voice live. The government’s policy of urging these communities to shift away from livelihoods such as pastoralism to sedentary farming, while incentivising foreigners to invest in the same areas raises human rights issues, such as the right to choose a lifestyle and livelihood strategy which are included in the country’s constitution. These are particularly controversial in Ethiopia’s new federal political order, which claims to ensure ethno-cultural justice. Whether Ethiopia will attain its ambitious goal of becoming a middle-income country in the next decade depends how it manages the transition from public investment-driven growth to a dynamic, private sector-heavy model. It will also hinge upon its attempts to mitigate the many political and social costs of the transition. Notwithstanding these challenges, it has already been a long, arduous and successful journey from a land of “biblical famine” to one of the brightest economies in Africa. *Source The Guardian .Dereje Feyissa Dori is the Africa research director at the International Law and Policy Institute, a research fellow of the Alexander Von Humboldt Foundation and adjunct associate professor at the College of Law and Governance, Addis Ababa University]]>