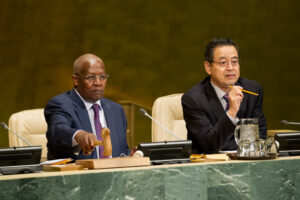 General Assembly President Sam Kutesa (left), and Zhang Saijin, Deputy Director of the General Assembly and Economic and Social Council (ECOSOC) Affairs Division, preside over a meeting on the New Partnership for Africa’s Development (NEPAD). UN Photo/Rick Bajornas[/caption] 17 October 2014 – Africa’s continued progress on growth and development targets will hinge on concerted efforts – from partnerships inside and outside the continent – to enhance infrastructure, a vital area that will facilitate diversification of African economies and unleash their full productive capacity, the President of the United Nations General Assembly said today. Assembly President Sam Kutesa spotlighted infrastructure development as he opened the 193-member body’s annual consideration of the landmark New Partnership for Africa’s Development (NEPAD), and other key issues concerning for the continent, including efforts to roll back malaria. The meeting caps what has become informally known as “Africa Week” (13 to 17 October) at UN Headquarters. With the adoption of NEPAD’s Programme for Infrastructure Development in Africa (PIDA) in July 2012, African Leaders laid a foundation for the development of critical regional and continental infrastructure,” he said. “Africa needs hydropower dams and transmission lines to facilitate production. It needs roads, railways and ports to facilitate commerce and trade. It needs core ICT [information and communications technology] infrastructure to support trade in goods and services, as well as governance structures,” added Mr. Kutesa. Hailing the efforts under NEPAD in coordinating development of infrastructure across the continent through PIDA’s priority Action as “commendable”, the Assembly President noted that over the last 12 months, of the 51 projects and programmes envisioned, 16 national and regional projects were identified as quick wins for financing and implementation. He said it is important that the Comprehensive Africa Agriculture Development Programme (CAADP) continues to receive attention, as a guiding framework for the development of this sector. “These projects and others will require enormous amounts of resources, but financing by governments alone is not enough. Other sources of funding, especially from the private sector, including specialized funds, should be tapped into,” said Mr. Kutesa, noting that the Presidential Infrastructure Champions Initiative (PICI), adopted to prioritise and fast-track the implementation of key regional projects is a step in the right direction. “Strengthened bilateral and regional cooperation to develop joint cross-border projects will also be important going forward,” he continued, adding that improving access to sustainable sources of clean, reliable and affordable energy will also be crucial to Africa’s economic and social development. “The United Nations Sustainable Energy for All initiative, which aims to ensure universal energy access by 2030, has highlighted the importance of access to electricity.” Turning to the global effort to curb eradicate malaria, one of the most serious health problems facing the world today and which is endemic in Africa, especially in tropical Africa, with an estimated 90 per cent of the total malaria incidence and deaths occurring there, he said that since the Assembly adopted the first resolution on malaria in 2000, the world has witnessed significant political commitment to the fight against the disease. “We should all be proud of the fact that just 10 years after the passage of the first resolution, more than 1.1 million deaths from malaria were averted,” he said, but cautioned against complacency. “We should redouble our efforts…to reach our ultimate goal of its total eradication. We must press on with conviction and determination that this preventable and treatable disease can be eradicated in our lifetime.” *Source UN.]]>