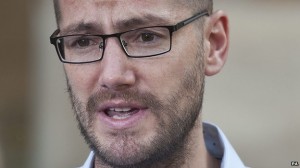 William Pooley, the British nurse who contracted Ebola while volunteering in West Africa, has returned to Sierra Leone to resume his work.

He said there was a “real emergency” in the country and he was “delighted” to be back on the front line. Mr Pooley will start work at a hospital in the Sierra Leonean capital, Freetown, on Monday. He has previously spoken of the “horror and the misery” he witnessed in his first spell in the country. While in the UK, the 29-year-old had said he was “impatient” to return to his work in Africa and would travel as soon as he had a new passport. His old one was incinerated when he was evacuated. The nurse, from Eyke in Suffolk, was flown back to the UK by the RAF on 24 August and was taken to the UK’s special isolation unit at the Royal Free Hospital in London. He was treated during the early stages of the infection, before the onset of internal or external bleeding. Unlike many people in Africa he was given the experimental drug ZMapp, which seemed to lower levels of the virus in his body. He has since made a full recovery and has donated his blood for medical research. Mr Pooley said: “I would like to once again thank the team at the Royal Free Hospital and the RAF who provided me with such excellent treatment and support. “But the real emergency is in West Africa, and the teams out there need all the support we can give them – I am now looking forward to getting back out there and doing all I can to prevent as many unnecessary deaths as possible.” More than 4,500 people have died in the Ebola outbreak, which is the largest in history. Mr Pooley will work at the isolation unit at Connaught Hospital in Freetown, Sierra Leone, where he will train staff and set up new isolation units. He will work with a team from King’s Health Partners – a collaboration between King’s College London and three NHS trusts – which is operating in the country. Dr Oliver Johnson, programme director for the King’s Sierra Leone Partnership, said: “It is fantastic that Will has chosen to join our small team here at Connaught Hospital. “The situation here in Freetown is getting worse by the day and so Will’s experience and commitment will be vital as we do everything we can to stem the flow of cases. “The best way of stopping Ebola spreading even further is to fight it at its source and I look forward to working with Will to do just that.” *Source BBC]]>