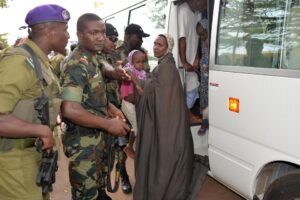 Cameroonian hostages, who were released to authorities after being kidnapped in raids blamed on the Nigerian Islamist group Boko Haram, arrive in Yaounde on October 11, 2014 (AFP Photo/Reinnier Kaze)[/caption]

He made the promise as he received 10 Chinese and 17 Cameroonians freed last week after spending months as hostages of armed men thought to belong to Boko Haram, an anti-Western rebel group in Nigeria which has been increasingly making incursions into Cameroon.

“The Cameroonian government assures you that it will ceaselessly continue to fight Boko Haram until it’s totally wiped out,” Biya said.

The 27 Cameroonians and Chinese were delivered to authorities on Friday night.

The government has not said how they were freed, but a security source said that “a ransom” was paid and around 20 imprisoned Islamists were freed in exchange.

“We take the line that when it comes to the protection of people or their lives, one does not speak of money,” government spokesman Issa Tchiroma Bakary said.

The Chinese were seized in May from a construction camp in Waza near the border with Nigeria in an attack that left one Cameroonian soldier dead.

The Cameroonians — including the wife of one of Cameroon’s deputy prime ministers — were abducted in July during two simultaneous assaults, also blamed on Boko Haram, in which at least 15 people died.

“We were in these sort of huts in a pretty dense forest,” one of the released Cameroonians, Seiny Boukar Lamine, told state radio.

“It was in a savannah with big trees and a lot of brush. We slept on the ground,” he said. He said he was held along with his wife and six children. Cameroon shares a border of more than 2,000 kilometres (1,200 miles) with Nigeria, where Boko Haram has been waging a bloody insurgency since 2009 in which 10,000 people have died. The Islamist group did not claim responsibility for the kidnappings, but it has been involved in other abductions, including that of over 200 schoolgirls in Nigeria in a case that sparked international outrage.

Boko Haram’s forays into Cameroon have prompted the government to deploy soldiers and combat planes to the north of the country.

On October 7, Cameroon, Chad, Niger, and Nigeria agreed to dispatch 700 soldiers to target the group.