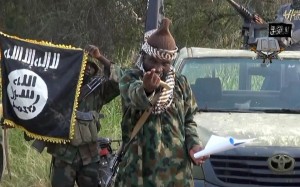 Boko Haram leader Abubakar Shekau appears on a video obtained by AFP on October 2, 2014 (AFP Photo/)[/caption] “Here I am, alive. I will only die the day Allah takes my breath,” Shekau said, adding that his group was “running our… Islamic caliphate” and administering strict sharia punishments.

Boko Haram has shown images of extreme violence before but the latest video shows at length graphic scenes of an amputation and a stoning to death as well as a beheading.

It also purports to show the wreckage of a Nigerian Air Force jet that went missing in the northeast on September 11. Boko Haram said its fighters shot it down but the military denied the claim.

The military announced last week that Shekau was dead and that a man who had been posing as the group’s leader in the videos had been killed after fighting with troops in the far northeast.

The new 36-minute video shows Shekau, in combat fatigues and black rubber boots, standing on the back of a pick-up truck and firing an anti-aircraft gun into the air.

Standing in front of three camouflaged vans and flanked by four heavily armed, masked fighters, he then speaks for 16 minutes in Arabic and the Hausa language widely spoken in northern Nigeria.

There was no indication of where or when the video was shot. Shekau appears in separate images from the violence.

The heavily bearded Shekau, who appeared to be the same man as those in previous clips, said the military’s claim that he was dead was propaganda.

Security analysts and the United States questioned the credibility of the military’s claim.

“Nothing will kill me until my days are over… Some people asked you if Shekau has two souls. No, I have one soul, by Allah,” he said, apparently reading from a script.

There have been two previous claims by Nigeria that Shekau had been killed or “may be dead” but Boko Haram later issued video denials.

Elsewhere in the new video, the militant leader said the group had implemented strict Islamic law in the towns that it had captured in the northeast in recent weeks.

“We are running our caliphate, our Islamic caliphate. We follow the Koran…in the land of Allah,” he said.

On the air force jet, Boko Haram fighters are seen apparently picking through the wreckage of the downed Alpha aircraft and the military’s green and white logo is clearly visible.

But air force spokesman Air Commodore Dele Alonge told AFP: “For any group to claim they shot it down is mere propaganda and rubbish.”

Military top brass suggested images of the plane could have been manipulated but said they were studying the claims in the video, even though they had not seen it.

They maintained they had provided “incontrovertible” evidence about the death of the Shekau impersonator but there was no “proof of life or currency such as screen time or date” on the video.

“The video did not make any reference to anything that has happened since the impostor’s reported death,” a statement said on defenceinfo.mil.ng. – Extreme violence – The video showed footage of a man being stoned to death for adultery, another having his right hand cut off at the wrist for theft and a man and a woman receiving 100 lashes for sex out of wedlock.

Crowds of men, women and children are seen watching the punishments.

The scenes of graphic violence are not unprecedented but come as other groups in the wider jihadi network, particularly Islamic State (IS) militants in Syria and Iraq, have issued similar footage.

In a Boko Haram video obtained on August 24, footage showed the apparent execution of about 20 men captured in town of Gwoza in Borno and two others beaten to death with rocks and pick-axes. Richard Downie, deputy director of the Africa Programme at the Center for Strategic and International Studies in Washington, said Boko Haram has likely adapted its videos to model the IS group, which has captured global attention by broadcasting grotesque violence. Extremist groups “learn from each other, certainly in terms of communication”, Downie told AFP, describing Shekau as a “savvy media character”.

But, he added, the influence of the IS organisation on Boko Haram is likely minimal, describing the group as still focused on Nigeria with limited interest in Arab jihadis.

“I’d be wary of the notion that the Middle East drives everything,” Downie said.