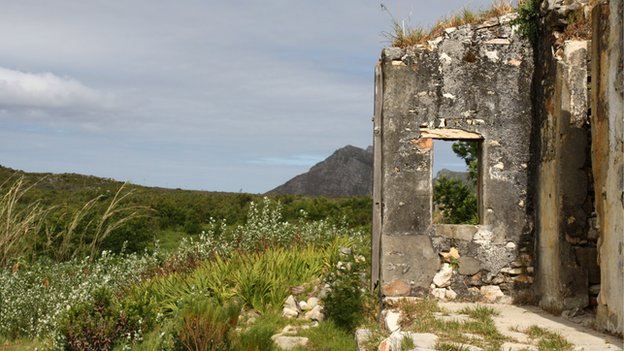 Many South Africans are still fighting to reclaim land taken away from them during apartheid. The BBC’s Sophie Ribstein spoke to a family about its ordeal.

It is a beautiful piece of land, a windswept nature reserve just above the bay of Simon’s Town. Walking through lush vegetation, you can see the wild rocky hilltops of the Cape peninsula in the distance.

But the magnificent mountain landscape, bathed in light, has been the theatre of a troubled history.

At the far end of the African continent, Redhill was once a village, home to more than 70 predominantly mixed-race (or coloured, as they are referred to in South Africa) families.

Today, the ruins of their houses are a refuge for baboons. Roofs and windows have been destroyed, blown away by the passing of time.

But stone walls are still standing, reminders of a precious past for those who were forcibly removed in the late 1960s by South Africa’s white minority regime.

“Here was the lounge and this used to be the kitchen with a fireplace and the small bedroom at the back,” says 78-year-old Lily Lawrence, walking through the old stones which were once her home.

The Group Areas Act, passed in 1950, was a pillar of the brutal apartheid regime.

Among other things, it led to the removal of non-whites from real estate considered desirable by the government. Over the following decades, thousands of families were forced to leave their homes and relocate to barren land.

The effects of this policy have yet to be reversed. Even in post-apartheid South Africa, much of the most fertile territory is still in the hands of a few thousand white commercial farmers.

The pace of reform has long been criticised as too slow.

Just after his re-election to a second term in office in May, South African President Jacob Zuma announced the creation of another window for lodging claims for the restitution of land. Many people had missed the previous window, which expired in 1998.

President Zuma also hailed the progress made so far in returning land to its rightful owners.

However, Mrs Lawrence and her relatives are not among the lucky ones.

In March 1970, the families at Redhill were given seven days’ notice to move. The authorities told them they wanted to build a dam – a project that has never been pursued.

Mrs Lawrence has vivid memories of happy years at Redhill.

“We all loved walking to the mountains, picking flowers and just smelling the aroma of the herbs,” she says. “There were animals – pigs, fowls, horses, milking cows.”

Under the 1950 law, Mrs Lawrence, her husband and their four children had no other choice but to leave their land.

“It was so heartbreaking, tears, tears and tears,” says Mrs Lawrence, recalling the day they left. She says the family had to leave much of their furniture behind – including heirlooms – as it could not be taken up the stairs of the flat they were moving to.

Ocean View, a poetic name for the family’s modest new home, was in reality a crowded apartment block on dry and sandy terrain.

“My husband was so mad. When we went up the stairs with the furniture left [behind], he looked through the window and started shouting: No, no, I don’t want to stay here,” recalls Mrs Lawrence.

Today, two of her children, Margaret and George, are doing everything possible for this past not to be forgotten. They were only eight and 13 years old when they left Redhill.

But the trauma of the forced removal remains. Margaret is an archivist at the Simon’s Town Museum. She collects pictures, texts, memories from the coloured community and tries to piece together their history.

She invites her mother to the museum to talk to schoolchildren. Twenty years after the end of apartheid, she wants the new generation to know what happened.

George, her brother, has embarked on a legal journey, trying to get the land back from the South African state. He says he registered the first land claim in 1998 – but since then, has only been to meetings and offered excuses for inaction.

“The only thing I want in my life is to come back to my land. I was born here, my roots are here. It is not so difficult, the government just has to sign the papers.”

Since President Zuma announced another window for the restitution, another 12,500 new claims have been lodged, according to the government-backed Land Claims Commission.

Mrs Lawrence and her family remain hopeful. George travels regularly to Cape Town, 40km away, to follow up the proceedings.

He also visits Redhill every two or three weeks.

With a fresh evening breeze blowing, he lights a fire next to the ruins of his home, makes a barbecue and lays a sheet on the old stones – just to sleep once again on the hill, albeit under an open sky.