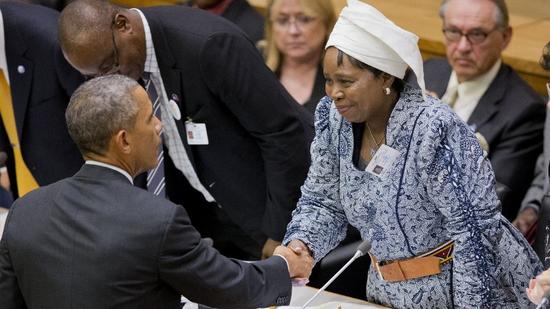 President Obama shakes hands with Nkosazana Dlamini Zuma, chairwoman of the African Union, at United Nations headquarters in New York on Sept. 25. (Pablo Martinez Monsivais / Associated Press)[/caption] When the headlines coming out of Africa are Ebola, terrorists who kidnap schoolgirls and various rebel movements taking over various governments, it’s difficult to talk about what Africa is beyond that collection of crises. But that’s part of the mission of the chairwoman of the African Union Commission, which oversees the African Union, an organization made up of 54 nations on the continent. Nkosazana Dlamini Zuma, a former South African minister who now chairs the African Union Commission, headquartered in Addis Ababa, Ethiopia, was in Los Angeles Thursday with U.S. Rep. Karen Bass (D-Los Angeles), the ranking member on the House’s Subcommittee on Africa, Global Health, Global Human Rights and International Organizations. “We see opportunities more than concerns,” Zuma says. “When we look at our demographics, we are a billion strong.” And the majority of the continent’s population is young, she noted.  What she would like to see is a more self-sufficient Africa, producing its own food products, developing a more skilled work force, and partnering with companies, not simply allowing them to extract oil and mineral riches. “China has been in Africa during good weather and bad weather. Now they are seizing those business opportunities,” Zuma said. “We think the U.S. should seize those opportunities where we can work together.” The U.S., she said, “is not bringing the type of investments that are important now: manufacturing. China is.” Bass is deeply involved in the effort to reauthorize the African Growth and Opportunity Act, a trade agreement that fosters trade and commercial ties between the U.S. and sub-Saharan Africa in particular. It is considered the cornerstone of U.S.-Africa trade engagement. “The U.S. still sees Africa as a charity case,” Bass said. “If all the U.S. knows about Africa is disease, conflict and famine, why would anyone invest there?” Good point. Africa is a complex continent that Americans sometimes think of as simply one big country. It’s not. For example, terrorism, said Zuma, affects fewer than 10 countries in the whole of Africa. It’s a touchy subject for her. “I never hear people say: How does terrorism affect America?” she said. (The difference, of course, is that the U.S. has a stable central government and the resources and technological infrastructure to battle terrorism. Some of the African countries wracked by terrorism do not.) Another touchy subject for Zuma is her life in South Africa. A former minister of several governmental departments under four South African presidents, starting with Nelson Mandela, her last term in office was under her former husband, Jacob Zuma, the controversial current president of South Africa. She resigned in 2012 after she won election to the chairmanship of the African Union Commission. “It’s always ‘she’s  the former wife,’ ” she said wearily of the way she is often referred to, as if that wipes out all her achievements. Frankly, I think Zuma might have some interesting insights into the trajectory of South Africa from Mandela through her ex-husband and the difficulties and controversies that all those post-Mandela leaders have had. But for now Zuma’s agenda is fostering the growth of trade and infrastructure and dispelling distorted images of the continent. However, she clearly understands that she must address the Ebola crisis. As chair of the African Union Commission, she has called for more protective clothing and disinfectants, treatment centers and more people to do contact tracing. “Part of what the African Union is doing is getting volunteers from Africa — nurses, doctors, medical technicians,” she said. That’s smart. This is not just an epidemic overshadowing the continent of Africa, it’s overshadowing the globe. Zuma raised another huge health issue for Africa that should not be forgotten: In the wake of resources being diverted to treat and stave off the Ebola virus, are other illnesses being ignored? “We should look at other diseases that are not being treated.” Zuma is right. In an effort to cope with this virus, it would be tragic to see the health systems in Ebola-stricken countries let people die of illnesses — malaria for example — that could be treated or prevented. *Source latimes]]>