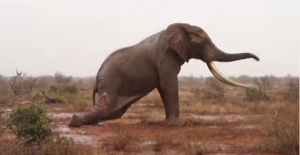 On 15th September an iconic bull elephant in Tsavo was saved thanks to the combined efforts of theDavid Sheldrick Wildlife Trust(DSWT)  and the Kenya Wildlife Service(KWS). This was the second call out of the day for these extraordinary people who, funded by DWST, fly into the bush at a moments notice to save the lives of wild elephants. Under pregnant skies the DSWT funded mobile veterinary team moved in for the second veterinary treatment of the day on the 15th of September.  A magnificent bull, one of Africa’s monuments, together with a group of bull friends (Askari’s), wandered the plains of Tsavo with a wound clearly visible to the DSWT pilot (Neville Sheldrick) who identified him being in trouble from the air. With storm clouds moving across the plains, KWS Veterinary Officer Dr. Poghon took off in the DSWT helicopter with pilot Humphrey Carter, with anesthetising darts at the ready.  On the ground the vehicle and veterinary ground team positioned themselves for rapid response.  At 1.00pm the bull was darted and conveniently fell onto his left side giving easy access to his injury.  His Askari companions had to be driven away from the bull’s side by the helicopter in order to allow the team to treat the patient uninterrupted. By this time the rain was pouring, which was the first rain of the season; much needed, but difficult conditions to work in. https://www.youtube.com/watch?v=YnLBuU518Tg   Dr. Poghon had a lot of cutting to do in order to remove the dead tissue which was forcing its way out of the wound; obviously caused by a poisoned arrow.   Once the wound was clear and clean, and long acting antibiotics were administered, the bull was given the revival drug.  All this took just 30 minutes and the bull was back on his feet unassisted despite the slippery mud, whilst the ground team observed from a distance. [caption id="attachment_12177" align="alignright" width="289"] 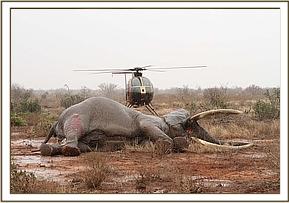 Photograph courtesy of DSWT[/caption] By now Dr. Poghon was in the front of the helicopter dripping wet, covered in mud and watching from the air as this magnificent animal rose from the ground and re-joined his friends who were waiting some distance away. Thanks to the aerial surveillance provided by the David Sheldrick Wildlife Trust’s aircraft,  this irreplaceable treasure was found in time, and the KWS and DSWT teams were able to effectively and efficiently save his life. The David Sheldrick Wildlife Trust’s Tsavo teams together with the Kenya Wildlife Service have been able to save 11 elephants in this area from poisoned arrow wounds in the past two weeks alone. *Source peterborchert.com  ]]>