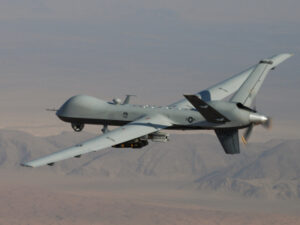 The United States is preparing to redeploy its unmanned aerial vehicles (UAVs) in Niger to a forward base in the Sahara closer to Islamist militants blamed for attacks across the region, U.S. military and Defence Department officials said.Washington deployed unarmed surveillance drones in Niger after a French-led military operation last year destroyed an al Qaeda enclave in neighbouring northern Mali. Supported by some 120 U.S. military personnel, they operate from a base outside the capital Niamey.The French military also flies drones out of the same base at Niamey, including two US-made Reaper aircraft as well as a Harfang UAV.Under the new plan, which is still being assessed by the U.S. military, that base would be relocated to the city of Agadez around 750 km (460 miles) northeast of Niamey.“Geographically and strategically, Agadez presents an attractive option…given its proximity to the threats in the region,” Benjamin Benson, spokesman for the U.S. military’s Africa Command, told Reuters. “When we were invited to establish a base, it was agreed at that point that we were gong to start operations in Niamey and later move north,” a US defence official told AFP.The US Air Force in July put out a $5-10 million request for bids to re-pave the runway at Manu Dayak Airfield in Agadez, saying final funding depended on approval from Niger.And in February, the US Defense Logistics Agency called for bids to deliver 7 million gallons of jet and diesel fuel to the Agadez airfield later this year.Bolstered by weapons looted from Libyan government arsenals, Islamist fighters took advantage of a Tuareg uprising and military coup in Mali to seize the country’s desert north in 2012.French troops and their West African regional allies succeeded in driving them back early last year. But al Qaeda-linked groups continue to operate across a loosely governed zone with porous borders straddling Niger, Mali, Mauritania, Algeria and Libya.Civilian and military officials in Niger told Reuters on Tuesday that the government had already given its green light to the plan to establish the base in Agadez.“Niger has given its total consent,” a senior Nigerien military officer said. “The goal is to secure our borders against jihadist infiltrations. Libya, for example, is gripped by turmoil and so surveillance must be reinforced there.”Niger said last year it would welcome the deployment of armed U.S. drones after Islamist launched twin attacks on a uranium mine operated by French nuclear energy company Areva at Arlit and a military barracks in Agadez.The United States has also deployed drones to Niger’s neighbour Chad, where they have been used in the search for more than 200 Nigerian schoolgirls abducted by the Islamist group Boko Haram in April. The US also operates UAVs over Somalia, Yemen and Libya, with Predators flying across the Mediterranean from a base in Sicily.The US is working with French forces to combat militants in northern Africa, for example by assisting France with logistics. France has around 1 200 soldiers in Mali and in July announced plans to permanently deploy 3 000 troops at bases in Mali, Chad, Niger and Burkina Faso under Operational Barkhane. *Source defenceweb]]>