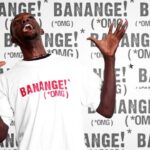 Definition Africa is a t-shirt business based in Kampala, Uganda. The energy and vitality of Ugandan life is translated into clothing, incorporating local designs and everyday expressions. “Banange” is a saying used in Luganda and loosely means[/caption] You’d be hard-pressed to find someone who doesn’t own a t-shirt; in fact, the ubiquitous garment is a mainstay in most wardrobes. Nevertheless, Olga Mugyenyi and Nahida Beghani have injected new life into the plain white “tee” with Definition Africa, a t-shirt store based in Kampala, Uganda. Bright prints, sharp slogans and youthful energy characterize Definition’s alternative approach to fashion, where everyday Ugandan life inspires each new design. “The concept of Definition came up in and around 2009,” Beghani recalls. “We felt like there weren’t really any products or apparel in the market that really celebrated the local experience,” she adds. Following its successful launch on Facebook, Definition Africa eventually evolved into a bricks-and-mortar retailer, growing a loyal and enthusiastic customer base since the store’s opening in January 2014. Despite the seemingly globalized nature of the fashion world, Definition’s success is largely inspired by regional quirks and local collaborations rather than the latest throwaway trend. “The t-shirts that we design are in theme with life in Uganda, things that we come across, statements, food, and people,” says Mugyenyi. “We also have a line that’s called ‘Signature Tees’ where we invite people to submit their designs and if they go through the approval process then they get printed,” she says. Having recently received the Young Creative Entrepreneur Award from the British Council, Definition Africa has firmly cemented itself as one to watch. However, the practicalities of producing and manufacturing locally-made clothing has proven to be just as difficult as they had anticipated. [caption id="attachment_11598" align="alignright" width="150"] 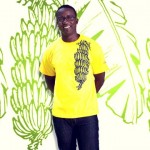 A picture of a matooke, a staple food in central and south western Uganda is featured on this t-shirt as part of the company’s In Your Face series.[/caption] “It would’ve been much easier to source our t-shirts in China, it would be much easier to get our stationery produced in Dubai, but we had to kind of stick to what we started with and that has been difficult,” says Mugyenyi. Currently, all of Definition’s products are made and sourced in various African countries — with blank t-shirts sent in from factories in Uganda, Kenya and Tanzania to be printed in-house. Ink, zips and embellishments, however, are mostly sourced from outside the continent, but the company aims to ensure that all components are 100% African-made in the future. This commitment to homegrown design is part of a greater ambition to support local and regional industry, the entrepreneurs say, and so far, consumers have been taking note. Mugyenyi adds: “One of the things that makes Definition what it is, is that the products are supposed to be entirely African in subject matter and as well as where the material comes from.” *Source CNN]]>