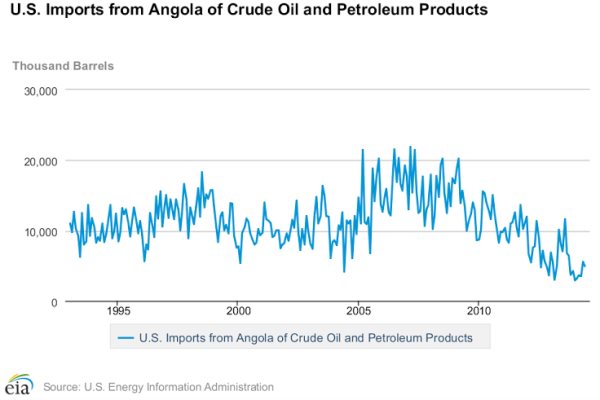 According to the US’ Energy Information Administration (EIA) data; While Nigeria’s oil exports to the US for the first half of 2014 stood at 20.596 million, the imports from Angola hit 23.733 million, rising above Nigeria for the for the first time. Although the US announced the reduction of oil imports from Nigeria this year, the shift became evident in the second half of last year when oil imports fell more than 50 percent while imports from Angola rose by over 2 percent. The reason for America’s greater patronage of Angola’s oil over Nigeria’s is given as the comparative ease of blending Angolan crude with America’s shale crude; Angola’s heavy sweet crude blend well with the America’s light sweet shale crude. America’s demand for heavy refined products and feedstocks also favour Angola’s crude. Angolan crude is described as mostly of a heavy sweet variety with a low specific gravity which makes it denser, and low sulphur content, making it more appealing to US oil refiners. 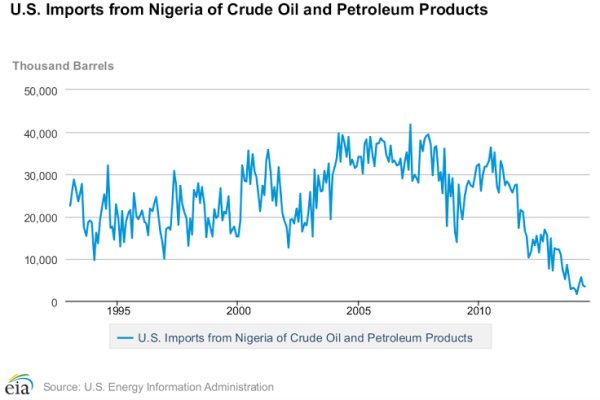 However, despite the overtaking of Nigeria by Angola, both countries are still witnessing a fall in oil exports to America. While Nigeria’s total 2013 oil exports to America stood at 102.611 million barrels and Angola at 78, 611 million, both countries are estimated to experience a huge fall in exports to US by the end of 2014. That already is made evident in the comparison of the data of the first half of the year; Nigeria’s H1 fell over 70 percent from 69.852 million barrels in 2013 to 20.596 millions barrels 2014. Import from Angola also fell but so many percentages lower than that of Nigeria; from 38.758 million barrels in H1 2013 to 23.733 million barrels in H1 2014, a 38.7 percent fall. Thus, Angola’s gain is only down to the fact that the rate of the fall in patronage from the US is not as high as that of Nigeria. US imports is set to keep dropping however, as the one-time highest importer of Nigeria’s oil marches to oil independence. U.S. oil production has grown rapidly in recent years, the EIA data, which reflect combined production of crude oil and lease condensate, show a rise from 5.7 million barrels per day (bbl/d) in 2011 to 7.4 million bbl/d in 2013. EIA’s Short-Term Energy Outlook (STEO) projects continuing rapid production growth in 2014 and 2015, with forecast production in 2015 reaching 9.2 million bbl/d.

Beyond 2015, EIA’s Annual Energy Outlook (AEO) projects further production growth, although its pace and duration remain uncertain. Domestic production plateaus near 9.6 million bbl/d between 2017 and 2020, close to its historical high of 9.6 million bbl/d in 1970, in the AEO 2014 Reference case. In the AEO2014 High Oil and Gas Resource case, growth continues through the 2020s and into the 2030s, with production reaching 13.3 million barrels per day in 2036. Nevertheless, America’s position in the importation of Nigerian oil is now a battleground for India and Brazil who are now the two top importers of the West African country’s oil. Angola also remains the second largest exporter of crude to China- which is the world’s highest importer of oil. *Source africanglobe]]>