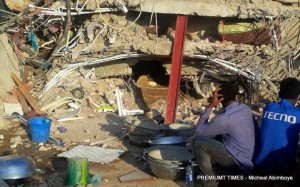 One of the survivors of the building collapse at The Synagogue Church of All Nations, Friday, told journalists that the incident was a demonic attack on the church. Taiwo Temitayo, who studied Business Studies at the University of West London, said that he doesn’t believe the incident was “ordinary.” “I know it’s a demonic attack, manifesting in the physical through whatever means. Because anything that’s not of God is definitely of satan, that one I can tell you for sure,” said Mr. Temitayo, 28. A five-storey building inside the church’s premises in Lagos collapsed on September 12 as three additional floors were being added to the original two-storey structure. Eighty-six dead bodies were recovered from the rubble and 131 rescued, according to the National Emergency Management Agency, NEMA. Although investigations are still ongoing, NEMA suggested that the extra floors being added to the building could be a factor in the incident. Mr. Temitayo, however, disagreed. “One thing I’m 100 percent certain of is that, because I don’t want to start naming things, it wasn’t a building collapse because this was a building that was meant to last for generations,” he said. Four South African survivors who had earlier spoken to Emmanuel TV, the church’s TV arm, had also described the incident as unnatural. But for the first time since the tragedy, the church arranged for a survivor to speak with the media. First Mr. Temitayo was interviewed by about half a dozen foreign media, before he appeared to local journalists, under the church’s watchful eyes. “He’s mainly here to share his experiences. We don’t want too many questions,” one of the church members said. Narrating how he survived, Mr. Temitayo said that the incident happened just after lunchtime that Friday. “By the grace of God, I am privileged to be part of the Visitors’ Coordinators of the church, to help out the international visitors coming week in week out. I was part of the team helping out visitors in the particular building where you find the rubbles. They have particular time when they do serve breakfast, lunch and dinner,” said Mr. Temitayo, an indigene of Ekiti State. “By the grace of God, every single day when the visitors are done with their breakfast, they head to the church where they have an evangelist or a wiseman, or the prophet himself who gives them lectures about the word of God. “The lunchtime was 1 o’clock and I as a person, being so occupied with so many things, I hadn’t even gone to have my own food, occupied with so many things visitors always demand. “I think I went to have a sandwich, break and egg and have some plantain as well… “The visitors had two options – they were gonna serve semolina and egusi soup on one side and fried rice and fish on one side. So I was making announcement knowing they are gonna probably need some water because we’ve got water dispensers in the dining. I was making the announcement and I was walking right through, so I went back to the back store to get some plastic cups so they don’t have to stress themselves by coming back to the counter,” Mr. Temitayo continued. “I just finished putting the plastic cups and I just turned and I looked up, because there was lady in my front, one of the coordinators who’s probably from one of the groups. And I was looking at her like ‘how are you madam?’ She came for a different reason. She was asking me a question. So I was just responding to that when I heard a sound a very sharp sound….” Mr. Temitayo described the sound he heard, while he was on the ground floor of the building, just before it collapsed as akin to that made while tearing a curtain. “A straight line sound. It was like when you have a saw going right through something,” he said. “And when my mind actually said ‘oh, this is not normal’ I just shouted Jesus, I put my hand to my head and I just ducked, and that was the last daylight I saw until I was saved. “I was on the floor… I had my phone in my pocket, I had my wallet, I still had everything like a normal day. I said to myself ‘oh God what’s happening?’ But as a human being, first thing I did was let me try and feel my fingers. Can I feel myself? You know you’ve seen people who go numb. They are aware of themselves but they can’t actually move anything. [caption id="attachment_12197" align="alignright" width="300"] 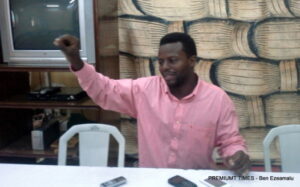 Mr. Temitayo survived the building collapse[/caption] And once I picked up the sensation in my fingers and my toes as well, I said thank you God that’s the first miracle,” said Mr. Temitayo. “Where I landed, I was actually on top of nails, and there was no piercing. “Once I got into a better position, I started finding my way to move into a position where I could be able to sit upright, forgetting the fact that I could not do that. But I started moving, if I could sit face down I could feel better. But there was no chance for that, it was just nails. Even these plastic chairs, if you break them they become sharp. “I was just baffled, like what’s happening? So I took out my phones, trying to see if I can get reception, call someone like ‘Is there anyone to help?’ It’s hardly dawned on everyone that probably it was the whole building. “By the grace of God, we were thought to pray in our hearts. I was praying in my heart. But this lady was in a high spirit, she was saying devil you are a liar, God is in control. That inspired me, that even in the midst of trouble, because we can say that with our mouth but to put that into practice is very hard. “That woman was just praying. There was a lady next to me, I tapped her just to make sure she’s Ok. Everything was getting airtight, time by time, it was getting more difficult to breathe. “I just lay there and say oh my God You created me for a purpose, let Your will be done and I know You will take glory in all these matter. Still not aware that it was the whole building. “From time to time I’d just try and push this but the woman kept telling me that I shouldn’t. Plastic chairs holding a whole building. I just said God is alive, there is hope, no need to panic.” As the minutes turned into hours under the rubble, the oxygen available to them started to drain away, according to Mr. Temitayo. And the available space started to get smaller. “I was lying down and the leg room wasn’t that much,” he said. At about 5.05 p.m., on Saturday – 28 hours after being trapped under the rubble – Mr. Temitayo said that he was pulled out by emergency officials. “I came out by God’s grace. No man can take the glory. No one was expecting that,” said Mr. Temitayo, sporting a bandage on the last finger of his left hand, where he said he sustained “a slight cut.” “By the grace of God, we have been taught to pray in our hearts. I was praying in my heart.” *Source Premium Times]]>