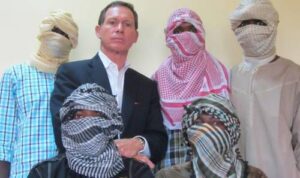 As Nigeria comes to grips with troubling revelations from Dr Stephen Davis on some alleged sponsors of Boko Haram, Dr Peregrino Brimah has faulted the government of levity in its handling of the sect and not playing fair with Nigerians. Some of the information shared by Dr Davis is not new says Dr Brimah who heads the Organization Every Nigerian Do Something –ENDS. Responding to questions, Dr Brimah says some of the revelations from Davis may not be much news to the government which has refused to name or bring Boko Haram sponsors to book. With the sect making strides with amazing ease, and the strong reputation of the Nigerian army on the line, the government of President Jonathan needs decisive action and to concern Nigerians like Dr Brimah, the government is not doing enough. Besides fighting in Nigeria, the news is dominated by revelations from Dr. Stephen Davis on some top sponsors of Boko Haram , first who is Dr Davis ,we understand he is Australian, how did he get involved with Boko Haram and Nigeria and why should his revelations be taken seriously? Because Davis has been a negotiator for the Nigerian government for years. He negotiated with MEND during that crisis in the 2000’s. The Jonathan government hired him to help solve the problem and in the course of that he has done what other Nigerians who knew were too afraid to do. He is all Nigeria has since Jonathan government has not for 5 years admitted the name of a single sponsor. Just been a little curious here, what will be the interest of Boko Haram to out their sponsors and what will be the interest of Dr Davis to make the names of the sponsors’ public at this time? We do not know the relationship Davis has with them. They did not out their names they only revealed this to Davis in private. It may shock many Nigerians to know that there is no secret in these identities. Many in Nigeria’s intelligence circles and government and even myself knew these were the sponsors from long. I published an article begging for Sheriff to be arrested in January and on July 19th I published another for ENDS in which we categorically declared and named this same army chief as the Boko Haram sponsor. With all the relative sophistication in terms of intelligence that Nigeria has, one of the best militaries in the continent, how comes the information been shared by Dr Davis eluded them or there is something we are missing here?  As mentioned earlier; Nigeria knows. Just like VP Namadi Sambo and Senator Ndume were clearly implicated and caught working with Boko Haram and Nigeria let them off the hook. This government simply does not care. When General Buhari 4 months ago reminded them about the VP being caught, he was bombed thereafter. What is your reaction to the way the Jonathan Administration has handled the Boko Haram crisis, it is hard to believe that for all its might, the Nigerian military which freed held off rebels in Liberia and Sierra Leone is finding it hard containing Boko haram? This answers the question on the role of the army chiefs. Unlike Liberia, these are just a handful of crooks in few jungles yet the military cannot fish them out? Of course it can, it just does not want to. When kidnappers ravaged Ihejirika’s Abia state, everyone saw how he quickly smoked them out and killed their leader. On the names revealed as sponsors of Boko Haram by Dr Davis, if we are not making a mistake ex-Army Chief, General Azubiike Ihejirika is from the South and Christian and ex Borno Governor Ali Modu Sheriff is a Muslim from the North, but Boko Haram is anti-Christian, what will be the logic of a Christian and a Muslim funding the sect? Boko Haram is anti-Human. It has killed as many Muslims as Christians or more. It is anti-farmer; it is simply there to displace the farmers. It has displaced over 4 million farmers so far. Someone wants the fertile farm-land. Maybe that’s where Sheriff comes in, or bigger dogs. Americans gun-run. Chinese supply guns to conflict zones. This is all business and for profit. Ihejirika supplied Boko Haram armoured tanks, APC’s and weapons. I am not sure they paid him up to the cost to facilitate the transfer of Nigeria’s arsenal to them. Over the 5 years he was in power, just look behind Shekau in any video to see all the Nigerian army gear Ihejirika took up north and gave Boko Haram and never bombed from the sky when he saw Boko driving the vehicles and committing their pogrom on the people. He makes huge profit selling and supplying to Boko and he is also double happy as people he hates die. [caption id="attachment_11769" align="alignright" width="300"] 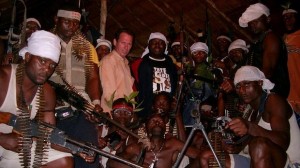 Davis with Asari Dokubo and Mend fighters[/caption] How has the government of Nigeria reacted to the information from Dr Davis and in what way does this help in fighting Boko Haram? Olisah Metuh accepted it and tried to spin it on APC; when that did not work, they are now denying Davis. I say Jonathan is like Judas. What did you make of the name cleansing press conference of Governor Modu Sheriff , was he convincing in his efforts to dismiss the accusations against him? I was happy to see Modu cry. God is punishing them. God is answering the prayers of the abducted girls. The Davis revelation was a miracle, a testimony of the girls. With a polity in confusion like Nigeria, the insecurity and a deficiency in trust for the political class, what should the people do, how can there make a positive contribution in turning things around? Jonathan is the confusionist. He first accused an “opposition” for a bombing, the Abuja bombing MEND admitted doing in 2012. This is when the animosity was created and since then he loves Boko Haram as a means to fester it. Jonathan is president by accident- by the poisoning of Yar’Adua. God will deliver us from him as God delivered us from Abacha. In what way is your Organization contributing in the building and emergence of a better Nigeria? We support all civilian efforts to make a change in our situation. There is no limit to what ways we support individual emancipation. We write, we organize, we donate and we fight. Elections are scheduled for next year, and there has been a raging debate on whether or not Jonathan should run or whether the next President should come from the South or the North, how will the ultimate outcome impact the security and soci0-economic progress of the country?  That is a joke. Even if the elections hold, regardless of the outcome Nigeria will face severe turmoil. I do not look at the elections, our organization is looking at Nigeria as in critical crisis and we are running to plaster the wounds as fast as we can. [caption id="attachment_11770" align="alignleft" width="300"] 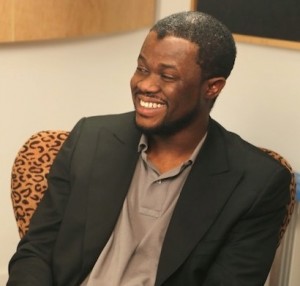 Dr Brimah[/caption] Nigeria has been on a democratic experiment since 1999, what are the odds that in the midst of the present security challenges, the military might be get power hungry again? I used to advocate them I actually pleaded Ihejirika take over and rescue Nigeria from Jonathan at a time. But today…well it does not matter, PDP, APC, Military, all are the same, it is all about the people and whoever fails will come under our axe. We must protect and be ready to swiftly sack whoever rules us; whether he wears uniform or not does not matter. I am one who has never bought the concept of western political democracy. But that is another topic. Last but very important question how do the recent developments from the fighting, to the declaration of a caliphate, and revelations of sponsors  impact on the fortunes of those innocent Chibok girls? Which girls? Thousands of girls have been abducted over the 5 years of this administration; and what of the boys? This army allows Boko haram raid towns and forcefully conscript thousands of boys. It is a global genocide happening in the north; the army is happy to allow their boys in Boko Haram raid villages and towns, forcefully conscript boys so the army kills them and on and on, exterminating the population in the north. There is no real strategy to deal with Boko haram. It is simply to be sustained till Borno is barren land. We activists only used the ‘girls’ story as a singular large event to attract attention to the larger plight of these areas. Since those girls were abducted, many more have been likewise and many people have been killed and mutilated. The caliphate name was plagiarized from ISIS just last month. Boko haram had no such intention and has no serious agenda except the extermination of life in the north. This is very clear and obvious to anyone who listens to Shekau.        ]]>