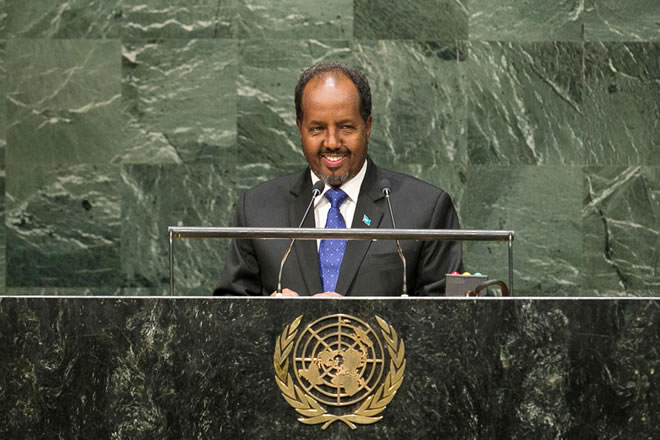 Somalia will be united by 2016, President tells UN General Assembly

Hassan Sheikh Mohamud, President of the Somali Republic, addresses the General Assembly.[/caption] Somalia is at a critical juncture in its efforts to achieve security and stability, the country’s President told the United Nations General Assembly calling for continued support to strengthen Somalia as a security and ideological “firewall.” Addressing the 69th high-level debate of the UN General Assembly, Somali President Hassan Sheikh Mohamud said that Somalia will meet the world’s aspirations for a better future, “We have a country that is beginning to unite as a nation, behind a vision that will see a federal and united Somalia in 2016.” He noted that his Federal Government is taking concrete steps to engage all Somalis, including women and minority groups, in the political process of nation-building. “Our success requires the support of our international partners, but most of all it demands the ownership and commitment of the Somali people,” he said. The President’s address follows a high-level meeting on Somalia held earlier this week on the margins of the General Assembly’s opening high-level session. During the event, Secretary-General Ban Ki-moon noted that the Somali peace process is “gathering momentum” but warned that there is “much work still ahead” for the Horn of Africa country. Speaking on Wednesday, Mr. Ban voiced optimism that the country was on track to achieving political and national stability through the Somali Federal Government’s “Vision 2016” plan for a political transformation, to which Mr. Mohamud alluded in his speech. In his address, the President also noted the humanitarian threat facing Somalia with around 3.2 million people in need of life-saving or livelihood saving aid. A $933 million humanitarian appeal for the country remains “severely underfunded” with only 32 per cent of the amount received. *Source hiiraan.com]]>