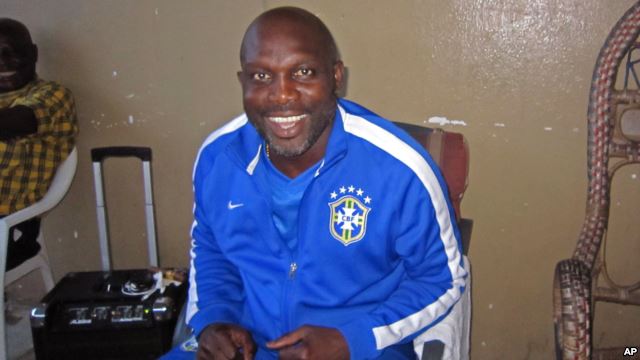 He is one of Liberia’s most popular citizens: George Weah, the former striker of Italy’s AC Milan who was named the world’s best soccer (football) player in 1995.  After his retirement from sports, Weah got involved in politics in his home country.  In 2005, he lost the presidential run-off poll to current President Ellen Johnson Sirleaf.  Now, Weah has recorded an anti-Ebola song to raise awareness after being approached by the Ministry of Health. Weah sits in his living room at his house on the outskirts of Monrovia.  The former soccer star just came back from a trip to Ghana where he recorded a song about Ebola with his friend, musician Barima Sidney. “I was approached by the Ministry [of Health] to carry on awareness in our communities here in Liberia and the rest of Africa to fight against Ebola and I thought music and television to do for people to get the message faster,“ he said. In the song, Weah talks about the ways Ebola is transmitted and calls on his countrymen to take the necessary measures that are written everywhere on posters across Monrovia. “It’s a straight message.  You know, let us fight against Ebola,” he said. “And it could be your mama, it could be your papa.  It could be your brother or sister. You know, from Liberia to Nigeria, from Guinea to Sierra Leone.  Take precautions and be safe.“ http://www.youtube.com/watch?v=KLNL5pm-49s The former presidential candidate opposes the government with his party, Congress for Democratic Change.  But, he says, it’s not the time to blame each other.  While it’s easy to point fingers at authorities or the health care system, everybody should think what he or she did wrong on a personal level, says Weah. “It’s unfortunate that we woke up one day with this epidemic, Ebola,” he said. “But again, we should hold ourselves responsible for the many deaths today because once it was declared that something called Ebola is coming into our society, a lot of people did not take it serious.“ Weah is optimistic that the deadly disease can be successfully defeated in a common effort with the international community. Once this has been accomplished, Liberians will need to stay cautious and refrain from old habits so that the disease will not come back.  Washing hands is one important precaution.  Another is not touching the dead body of a loved one when one doesn’t know the cause of death. “We have to refrain from doing what we did before. … What we need to do now is be clean, keep our environment clean for germs and disease not to come around,” Weah said. “Make sure that our community are safe, continue to even help those who are, those health workers, because those are who risk their lives, and take their advice.“ Liberia is the country hardest hit by the current Ebola outbreak.  More than 1,500 Liberians have been killed by the disease.  The World Health Organization warns that without quick action, more than 20,000 people across Liberia and nearby countries could be infected. *Source VOA]]>