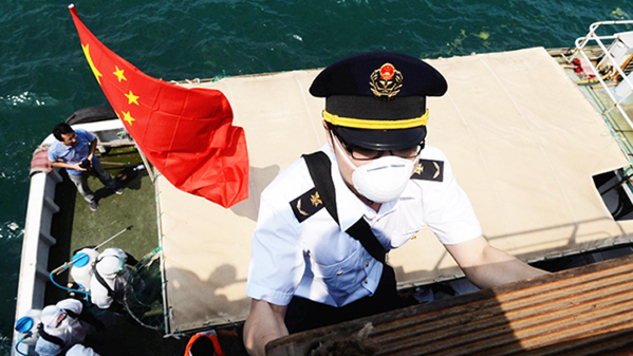 LI Luming carefully straightens a table cloth in his empty restaurant in Sierra Leone’s capital Freetown as he laments the damage Ebola has done to business. It is a pointless gesture—the table, like dozens in the “Beijing Restaurant”, has not been used for weeks—but it is important to keep going, to show the staff that it’s “business as usual”. A favourite of locals and Chinese expatriates alike for more than a decade, the restaurant has seen just a handful of customers since June. “With Ebola, everyone is afraid. No one wants to go out,” 50-year-old Li tells AFP at the 70-cover eaterie in Freetown’s Murray Town district. Li has been in the capital for two decades but, like many entrepreneurs in the once-thriving and influential Chinese community, he is thinking of packing it in and heading back home. “Before Ebola, all the Chinese and some foreigners came here to eat. Now nobody comes. We have no customers. We may have to close,” he says. Ebola, a virulent tropical haemorrhagic fever, has claimed almost 1,500 lives since the start of the year in Sierra Leone, Liberia, Guinea and Nigeria. Quarantine shock Eastern Sierra Leone has been particularly hard-hit, but a death in Freetown has spread fear that the capital could be in line for a wave of cases. The quarantining of eight Chinese medical workers was particularly shocking to their compatriots, say members of the community in Freetown. An exodus by Chinese business would be calamitous for the commercial centre of Sierra Leone, one of the world’s poorest countries still struggling to recover from a ruinous 11-year civil war which ended in 2002. The Chinese embassy estimates the community in Freetown to number only “several hundred”, a spokesman told AFP, but its influence extends far beyond its size. ‘Scared away’ Dozens of Chinese restaurants, hardware stores, machine parts manufacturers and construction firms can be seen across the sprawling city of 1.2 million people. Chinese contractors have built bridges and roads, Freetown’s national stadium, government and parliament offices and a 100-bed hospital close to the capital. Beijing has invested in agriculture, health care and education in Sierra Leone since 1971, when diplomatic ties were first fostered during Chairman Mao’s Cultural Revolution in China. Investment tailed off during the civil war, but China has since emerged as Sierra Leone’s second-biggest import and export partner, after the European Union. Trade between the two countries stood at $109 million by 2010, and total Chinese direct investment amounted to $51.2 million. (ALSO READ Inside Chinese-Africa relations – thelies, damn lies, truths, and everything in between) Although poverty is widespread in the country, Sierra Leone has mineral riches including diamond resources, gold, bauxite, titanium ore and magnetite iron-ore. These have attracted massive investments. President Ernest Koroma signed deals with China last year worth $8 billion for huge construction projects, including a new international airport 60 kilometres (40 miles) from Freetown. With the Ebola crisis likely to continue for months rather than weeks, China’s policy of support for Sierra Leone’s recovery has never faced a sterner test. The Chinese embassy has announced an aid package worth $1.6 million to help its host nation through the crisis, but has yet to make a public commitment to Sierra Leone’s economy. The mission told AFP that the effects of the Ebola crisis were “a very sensitive issue”, and did not respond to several requests for more detailed comment. Alimamy Bangura, director of the finance ministry’s economic policy and research unit, told AFP that double-digit economic growth in 2012 and 2013 was driven not just by mining but also by the services sector, which is disproportionately dominated by the Chinese in Freetown. “Tourism is a fast-growing sector in Sierra Leone, but because of the Ebola outbreak investors and visitors are now scared away, and in most of the hotels now the occupancies are very low,” he said. Night clubs, cinemas and bars had been ordered shut to minimise the spread of the epidemic, while restaurants are doing poor business, he said. ‘Many Chinese have gone’ Freetown’s Lumley Beach district, usually packed day and night with tourists, local diners, street hawkers and sex workers, is unusually quiet. Staff try to look busy at the China Town Guest House, cleaning floors which no one has dirtied. “Before Ebola, business came from everywhere, business people as well as tourists,” says Lan Lan Jaffa, owner of the 17-room hotel. The 51-year-old, from southern China, has made good profits since she opened the hotel, a supermarket and an adjoining restaurant with her Lebanese husband 11 years ago. But she estimates that turnover is down by more than 70% on last year’s figures. “Business is actually very bad now. After May it got worse, June was stable but in July we saw very few guests—about three or four. In August we have had only one.” Jaffa employs 30 local staff and 14 Chinese, two of whom, frightened by the Ebola outbreak raging in the country’s east, decided to go home. Many in the Chinese community have followed suit, Jaffa tells AFP, leaving the businesses which rely on them without customers. “We can manage because I own the building and don’t pay any rent. But I know about two restaurants that have closed already,” she says. “People are scared and worried and everyone wants to go home. Some people are staying, but many Chinese have gone.” *Source M & G/AFP]]>