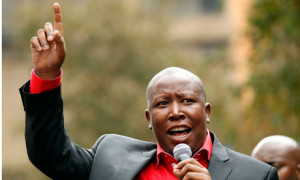 Julius Malema[/caption] Holding out an olive branch to a mostly white audience during a plush lunch at Kelvin Grove in Newlands, Cape Town, today, Malema – wearing his signature red overalls and beret – said that there were many misconceptions about the EFF. The EFF was not embarking on a racial struggle, but a struggle for economic freedom, he said, adding that the party had filled a vacuum left by the ANC after it had discarded its principles. “This country won’t look nice without you guys. We complement each other. We have even started dating each other,” he told a packed audience at an event organised by the Cape Town Press Club. Malema said there were also many Afrikaners at his son’s school, which according to media reports is a private school. “I want him to know that white people are human beings … I told him they can be bossy at times. We must not be scared of each other. We must grow up together.” He warned, however, that whites needed to share in the country’s wealth, that unproductive land needed to be expropriated, and mines and banks needed to be nationalised. “There cannot be two nations, one for the rich and one for the poor.” Appealing for whites to embrace change, he said: “Your security is guaranteed by the empowerment of poor people.” If there was no redistribution, Malema warned that there would be an “unled revolution”, which would lead to anarchy. The controversial EFF leader arrived at the venue in the heart of the southern suburbs about 35 minutes late after apparently getting lost.