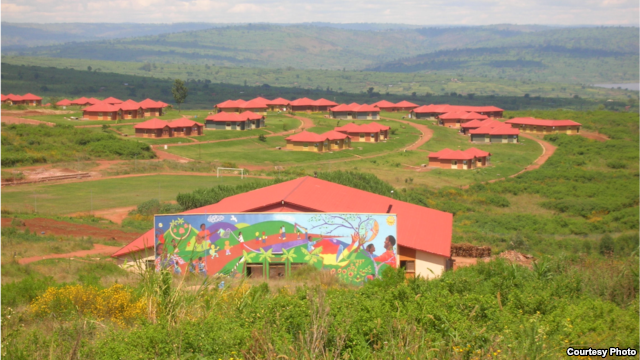 Agahozo-Shalom Youth Village, east of Kigali. The village is home to the biggest solar power plant in East Africa. Credit: ASYV[/caption] The biggest solar power factory, or plant, in EastAfrica recently opened in Rwanda. Solar power isproduced from sun light. The plant is in Agahozo Shalom village in easternRwanda. The plant is the first of its kind in the area. The 21-hectare field, orsolar park, is covered with special devices called panels. They store energyfrom the sun.  Until last month, South Africa was the only country in sub-Saharan Africa tohave a large amount of solar power for its grid, or total power supply. The Agahozo solar plant produces up to 8.5 megawatts of electricity. That isnearly seven percent of the total power supply in the country. Thegovernment has signed a power purchase agreement, or PPA, to pay for that electricity over the next 25 years. Dan Klinck owns the business that has a civil works contract on the project. He explains why Rwanda is leading the way for solar power in East Africa.   “Rwanda’s doing a number of things right. I mean one, security. It is a placewhere people can trust their PPA’s for 25 years…geo-political stability,Rwanda probably is the most attractive place in East Africa. And Rwanda’sregulatory framework – no corruption. It is a very, very transparent system.” The exact price the Rwandan government will pay for the electricity from theAgahozo plant is confidential, or secret. But sources tell VOA the price isbetween 20 and 25 U.S. cents per kilowatt. Experts say that is about twiceas costly as most hydropower plants. Those are factories that produceelectricity from moving water. But Rwanda still gets nearly half its electricity from diesel fuel. Electricityproduced from diesel costs 38 cents per kilowatt in Rwanda. Solar powerfluctuates, or, changes often. The Rwandan government does not wantmore than 10 percent of the country’s power from solar energy. However, that 10 percent is needed to save on diesel. Dan Klinck says solar power ismuch faster to set in place than other kinds of energy sources, likehydropower. “A typical hydropower project you would say takes two years ofdevelopment.  With solar we took the site in February and it was completedand already giving electricity in July. So we are talking six months versustwo years.” Villagers who were farming on the area of the current solar plant lookforward to the electricity. But many will have to wait years to connect to thesolar power grid. For many of those rural residents, solar home systems with panelsattached to the top of homes may be an answer. The German companyMobisol says they can offer Rwandans a system that powers several lamps, a phone charger, a flashlight and a radio. The cost of the power system is $10 a month over three years. One Mobisol representative says 80 percent of Rwandan families can paythat amount. Klaus Maier is in charge of the Mobisol office in Rwanda. He believes thatRwanda is a good place to have a solar park. He says that solar panels donot work well if they get too hot. Rwanda averages only five hours ofsunshine per day. The Agahozo solar park has more than 28,000 solar panels and was built at a cost of $23.7 million.  ]]>