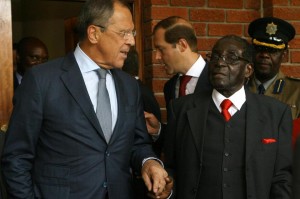 Darwendale (Zimbabwe) (AFP) – Mired in a conflict in Ukraine and isolated by the West, Russia sought to woo African allies on Tuesday, with foreign minister Sergei Lavrov hailing the continent’s role in a new world order.

“Africa is one of the pillars of the evolving world system,” Lavrov said during a visit to Zimbabwe, where he signed co-operation deals and won diplomatic backing for the fight against Western sanctions.

The most recent wave of Western measures targeted Russia’s banking, energy and defence sectors — sending the ruble crashing to record lows. “We are all convinced that these unilateral coercive policies have no future,” Lavrov said. “What is important these days is to recognise the pluralism in the international community.” During the Cold War the Soviet Union and the West scrambled for influence in Africa, installing puppet leaders and igniting proxy wars that killed millions from Angola to Mozambique. Russia hopes to once again enlist allies on the continent, where rapid economic growth is predicted in the coming years, as a counterweight to American influence. “There is no coming back to a unipolar world, to a bi-polar world. The future of the world would only be multiple, otherwise the whole system would not be sustainable.” Lavrov won support from his 90-year-old host, who has long been a thorn in the side of Africa’s former colonisers and who has suffered more than a decade of sanctions for a litany of rights abuses. Mugabe said the Western sanctions against Moscow were “illegal”. “If sanctions are to apply they must be approved by the UN and those that are being imposed on the Russian Federation have not,” Mugabe said after sealing a $3 billion (2.3 billion-euro) investment for Russian business to tap Zimbabwe’s platinum resources.

“They are illegal sanctions. So you have a lawless part of our international community seeking to dominate the rest of the world and we say no!”

“That must never be allowed to go on,” Mugabe said.

The Western sanctions on Russia were imposed in retaliation to Moscow’s annexation of Crimea and support for separatists in east Ukraine.