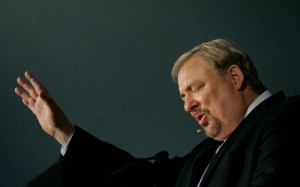 Is the megachurch pastor doing good in Africa—or cynically exploiting African leaders to enhance his position and spread a social conservative message that oppresses women and gays?

There are many sides to American megachurch pastor Rick Warren.

There is the Warren who has announced his 2015 “All-Africa Purpose Driven Church Leadership Conference,” hyping it as part of a five-point “P.E.A.C.E.” planto Plant churches, Equip “servant leaders,” Assist the poor, Care for the sick, and Educate the next generation. He says he hopes to attract attendees from all 54 countries in Africa to spread the evangelical gospel.

Then there is the Warren who disavowed but, critics maintain, also helped inspire Uganda’s Anti-Homosexuality Act (AHA), under which violence against LGBT people increased tenfold, according to a report prepared by Sexual Minorities Uganda, including “lynching, mob violence, homes burned down, blackmail, lost jobs, arrests, evictions and suicides.”

So is Warren leading a double life? No—more like two sides of the same coin.

Critics accuse him of cynically exploiting African leaders to enhance his own position and spread a socially conservative message that oppresses women and LGBT people.

At the same time, Warren’s socially conservative message is right there in plain view. Yes, he is concerned about poverty and climate change, but he makes no secret of his opposition to abortion (he has compared the idea of making abortion rare to saving only some people during the Holocaust) to the Holocaust) and same-sex marriage (which he has compared to pedophilia and incest). President Obama may have tapped Warren to give his inaugural invocation, but he’s no moderate.

Indeed, Warren’s newfound emphasis on Africa may well reflect the sense among Christian conservatives that America has already been lost, but Africa may yet be saved. Here, the culture war has been won by Satan; there, it may still be won by God.

There is, of course, an uncomfortable neo-colonialism to this mission, one reinforced by countless pictures of the white pastor greeting a room full of black Africans. Yet according to some observers, the obvious racial overtones may not matter. “Black Africans follow people like Rick Warren because of a culture of dependence created by generations of exploitation in Africa by the West,” Pastor Joseph Tolton, executive director of The Fellowship Global, a progressive network of African and African-American clergy, told The Daily Beast. “White leaders from the West partner with Africa’s elite to control the wealth and the people for their own ends.”

Yet Tolton added that many African-Americans in the so-called black church may likewise support Warren out of social conservatism, regardless of this legacy.

Moderates and progressives, however, have at least three reasons to be worried about Warren’s Africa plan.

First, he’s already made some strange bedfellows. Rwandan President Paul Kagame, whose relationship with Warren reportedly began when Kagame read The Purpose Driven Life, has been accused of human rights violations by Amnesty International and Human Rights Watch. Noting Kagame’s many Western boosters, a recent profile in Politico called him “the darling tyrant.”

And the country he presides over, while making economic progress in the 20 years since the genocide ended, is effectively a one-party state still riven by ethnic tensions.

So for Warren to exclaim that Rwandans have “figured out a way for people to live together in reconciliation” is, at best, naïve. At worst, it is whitewashing. Certainly, the partnership seems opportunistic: a great fundraiser for Warren’s organization (annual budget: $36 million) and righteous credibility for a “tyrant.”

Second, even Warren’s seemingly inoffensive proposals to “care for the sick” and “educate the next generation” could be seen as ultra-conservative wolves in sheep’s clothing. Take Warren’s role as one of the primary figures in U.S. evangelicals’ involvement in combating AIDS in Africa. He was a big booster of PEPFAR, George W. Bush’s “President’s Emergency Plan For AIDS Relief.” And he gave Bush an award for adopting it. But that support comes with a significant price: an emphasis on abstinence-based prevention techniques, a refusal to educate MSM (men who have sex with men) in safer sex, a refusal to distribute condoms, and, most important, a huge flow of money to church-based organizations who—as in Uganda—fight against LGBT people when they’re not fighting AIDS. Many AIDS activists question whether the PEPFAR money is worth this social cost.

Indeed, according to a report in these pages, Warren’s HIV-related activism in Africa has resulted in the termination of some of the continent’s most effective HIV prevention programs.

Finally, there’s the gay thing. The think tank Political Research Associates has documented how Warren’s hands are all over Africa’s anti-gay paroxysm, even as he has tried to wash them clean of it and took to social media  to denounce the Uganda law and what he said were “lies and errors and false reports” that he played a part in it.

Martin Ssempa, the primary clerical force behind Uganda’s now-defunct AHA and a man who has been known to burn condoms at demonstrations, is a Warren protégé. And while Warren denounced the AHA in 2009, he preached against homosexuality in Uganda in 2008. (Indeed, after what he viewed as Warren’s about-face, Ssempa wrote him a public letter to complain.) According to PRA’s Kapya Kaoma, the links are many and clear.

None of this contradicts Warren’s righteous rhetoric of planting churches and educating the young. On the contrary, the actions explain the rhetoric. Churches, schools, and faith-based health services implement Warren’s evangelical vision, in Africa and here at home. Social conservatism is not the entirety of that vision, but it is an essential part of it. And the consequences of that conservatism—marginalization of LGBT people, gag rules on health-care providers, questionable partners to advance the agenda—are all part of the package.

To call Warren anti-gay, hateful, or homophobic is to miss the point. The image of a Ugandan lynched for being gay won’t be found in Warren advertising materials, or in his sermons. It doesn’t have to be. It just comes with the territory.

A VIEW INTO AFRICA,THE AFRICA CHANNEL