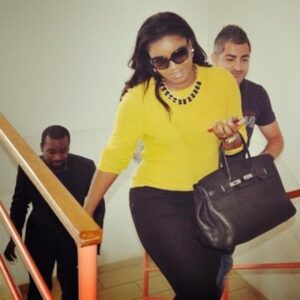 Omotola Jalade-Ekeinde[/caption] One of the most successful and recognized by critics Nigerian actresses Omotola Jalade-Ekeinde in a recent interview spoke about her career, marriage and many other spicy details of her life.The 36-year-old start has been recently confirmed Nigeria’s most popular female entertainer on the internet, with the highest number of social media followers on Twitter and Facebook, Nigeriafilms recalls. Omosexy, as she is gently referred to by her fans, has achieved a lot not only in her professional, but also in private life. The happy wife has managed to keep the wonderful shape despite having delivered 4 (!) children.When asked about how she had been able to keep fit, the actress said: “First and foremost, I use the power of the tongue. I look at the mirror and say to myself ‘You are slim; you are losing weight in all the right places.’ It’s funny, right? But then, also, I try to eat healthy, and I’m very active. I have just started working out with a trainer, but prior to that I just stay active.”Omotola got married in 1996 but has never become the casual-clothes woman. She keeps wearing tight and elegant dresses proving over and over again that she is not just Omo, but OmoSEXY. When asked about her style of clothing, whether her husband is satisfied with it, she said:“My husband is extremely in support. I can’t even wear some clothes my husband approves of. People would think I’m crazy, they would read meaning into our relationship. He is a very enlightened person and someone who believes in his heart. Even with our kids, he trusts them so much.”And the actress eagerly continued with praising her second half for being a gentle, supportive and understanding man:And the actress eagerly continued with praising her second half for being a gentle, supportive and understanding man:“I bless God, it’s been wonderful. God has been very good and I give the glory to Him. And secondly, I’d give credit to my husband. Because, I think I’m the difficult one, because of the demands of my career and because I’m the woman. But he’s been extremely supportive.”Although Omotola’s working schedule is even tighter that her dresses, she still dedicates every free minute of her life to the family and to the upbringing of her children. The actress however confesses she is a strict kind of parent.“I am a very hands-on Mum. My kids would tell you I’m extremely strict also, because I was trained by a very strict Mum. My Mum was an Egba woman; she used to sit on me. When they say I’m very strict, I say ‘You’re lucky I don’t sit on you.’ I use most of the doctrines in the Bible; I’m always in their business.”This statement can be proved by the incident which happened this year, when the photos of Omotola’s daughter went viral. The actress attacked media over describing her 14-year-old daughter’s as “hot” and “sexy”.Speaking about her children, Omotola recalled the times when she was still a child narrated how the loss of father at the age of 12 affected her life:“I was extremely close to him and it really affected me because, for a long time I was thinking I would die, too. I felt so much grief and it was a lot of strain on my mother because she had three kids to cater for and didn’t want our standard of living to drop. I wanted to help her, so after I left secondary school I started modelling.”The actress also revealed the peculiarities of her character and explained why some people might allege she is snobbish:“I guess I have this demeanour that makes me look like I’m in my own zone. People just assume that I’m a snob. Sometimes I really could enter into my own zone, and it depends on where I am. If I’m in a place where the air is too stiff for me, I just become very quiet. But if I get to a place and feel the vibe and it’s free and fun, you are virtually going to beg me to sit in one place. I’m too extreme; I can be overly bubbly and overly quiet. I’m never really in the middle and I can’t pretend.”The interview concluded with the correspondent asking whether Omo feels threatened by the upcoming beautiful and talented actresses, to which she responded:“I’m not the most intelligent, I’m not the best actress either, and I don’t think I have the best attitude, but I always ask God for His grace. There are new challenges everyday and I ask God to teach me. You have to always remember there is nothing special about you, it’s just His grace. What you think you have somebody else probably even have double. There are younger, new, hotter, more aggressive people around now. I just try to be myself, work hard, and rely on what can take me far.”*Source ghanavibes]]>