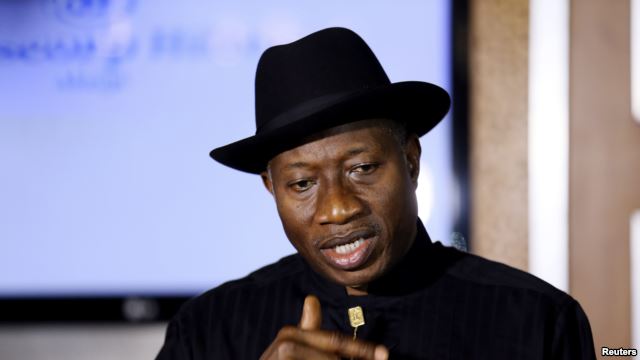 Goodluck Jonathan[/caption] Prominent members of Nigeria’s ruling People’s Democratic Party (PDP) unanimously endorsed incumbent President Goodluck Jonathan to be the group’s candidate in February’s presidential election, according to Senator Walid Jibrin, Secretary of the party’s Board of Trustees. Jibrin says the National Executive Council, the Board of Trustees, governor’s forum, as well as the senators’ caucus and women various groups chose Jonathan to represent the party ahead of the PDP’s primary scheduled for November. “There would be no other candidate to contest the primaries with President Goodluck Jonathan,” said Jibrin. “This is a good omen for the politics of Nigeria, for democracy, and for Nigeria. This will reduce a lot of cost and wrangling … and fighting among ourselves in going about the elections. We will be able to save more money to face the opposition in the coming election.” With no apparent challenger from the ruling party, the endorsement effectively paves the way for Jonathan to seek a second full-year term of office. Although widely expected to seek another term, he has yet to publicly declare his intention to do so. “Whether he announces that he is going to contest or he doesn’t, we have already made him our candidate, and he has said he is overwhelmed by this decision,” said Jibrin. “I am sure he will not disappoint this august body that has decided to endorse him. He will never disappoint them.” Analysts say Jonathan faces a stiff challenge from the main opposition All Progressives Congress (APC). Months ago, several leading members of the PDP including governors, Senators and members of the House of Representatives, defected to the APC, strengthening the party’s chances in next year’s vote. The APC has yet to choose its candidate for the election, although a leading member of the group, former vice president Atiku Abubakar, declared his intention to seek the party’s endorsement. The APC has often accused President Jonathan of being unable to protect civilians following what they party says is an increase in brazen attacks by the violent Islamist militant group, Boko Haram. But administration officials say those charges are designed to embarrass the president and make him unpopular in the run up to the election. They contend that Nigeria faces an asymmetrical war launched by the militants, which requires international cooperation to end. *Source VOA]]>