By Max Borowski Nigeria’s army has reported several successes in the battle against Islamist group Boko Haram. Observers are skeptical and also doubt claims that the group’s leader has been killed – not for the first time. [caption id="attachment_12464" align="alignleft" width="290"] 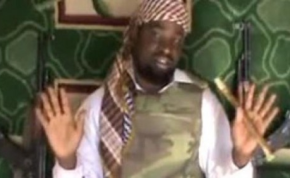 Shekau, but which one?[/caption] The Nigerian army attracted considerable attention with its recent claims of not one but several military successes against Islamist terror group Boko Haram. The Islamists had been advancing unopposed for months, swallowing up more and more areas into their self-proclaimed caliphate, but now the army says they have forced them back with a decisive strike. Several hundred fighters had surrendered to the army, said military spokesman Chris Olukolade on Wednesday (24.09.2014). In addition “a certain Mohammed Bashir who had posed in various videos as the group’s leader Abubakar Shekau, died in that operation.” Last year the army announced Shekau had been killed in an exchange of fire. However the self-proclaimed imam then made an appearance in several new video messages. The army could not prove that Shekau was really dead – but neither could Boko Haram remove doubts that he had been impersonated by a double in the videos. In Nigeria the fresh news of Shekau’s death was met with great skepticism. “So he’s dead again,” was the comment by Hamid Ali, a retired army colonel. “I wonder just how many lives he has.” But even if he has really been killed this time, that is not the issue, Nigerian analyst Mack Mijinyana said in an interview with DW. There was no reason to hope that Boko Haram would become less violent. He recalled the confirmed death of the group’s founder, Mohammed Yousuf, in 2009. “They thought his death was the end of Boko Haram but what we saw after that was outrageous, beyond our imagination.”

Nigerian journalist Ahmad Salikida dismissed the army claims as false. Salikida was a mediator in the negotiations between the government and Boko Haram for the release of the more than 200 schoolgirls kidnapped almost six months ago and said he had information from within Boko Haram. Writing on Twitter he said none of the towns occupied by the group had been liberated and Ahmed Shekau was still “alive and well.” According to Colonel Ali, Shekau’s death has little propaganda value. The army had been given the run around for months by a mob with little military training, he said. The picture most Nigerians have of their military forces as an inefficient, ill-equipped force would not change until the soldiers succeed in ending Boko Haram’s killing spree. Ali is also skeptical about the reports of army successes in pushing the Islamists back and taking numerous prisoners. These reports had not been confirmed by independent sources, he said. In past months the army had been unable to prevent Boko Haram taking control of large areas in the states of Borno and Adama. There, the Islamists claimed they had established a caliphate and imposed their draconian version of Islamic law. Hundreds of thousands have fled from the approaching militants. So far Boko Haram has not attempted to take the city of Maiduguri, Borno’s capital, but halted its advance some 40 kilometres (25 miles) away. The government must act to give the army better equipment, said the Catholic bishop of Maiduguri, Oliver Dashe Doeme, in an interview with DW. “And the government must ensure that people who support and finance terror are punished.” Since the beginning of the insurgency in 2009, Boko Haram is believed to have killed more than 10,000 people. On Thursday, Nigerian lawmakers approved a request from President Goodluck Jonathan for a more than $1 billion loan (79,000 euros) to fight Boko Haram. The loan is to be used for ships, armaments and helicopters, a senate committee said. A presidential election is scheduled for Feburary 2015, at which Jonathan is widely expected to seek a further term in office. *Source allafrica.com]]>