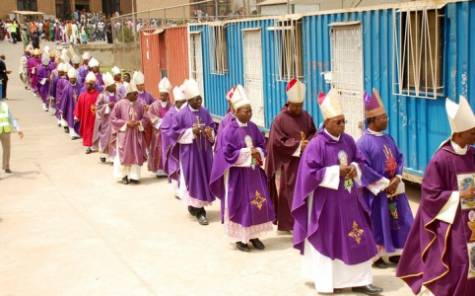 Catholic Bishops have called on the Nigerian government to do more to safeguard lives and defend the nation, reminding them that the primary duty of government is to preserve and protect the life of citizens irrespective of tribe, religion, social class or tradition. The Bishops issued the appeal on Thursday at their Second Annual Plenary meeting in Warn, Delta State, and announced they are organizing a national all-night prayer to be held in Abuja on 13 and 14 November. “It must do more than it is currently doing to fight off and disarm these actual destroyers of Nigerians and Nigeria,” it said of the federal government.  “It must do more than it is currently doing to prevent segments of our nation from drifting, anarchy and mutual self-destruction and bring criminals to justice.” They regretted that their meeting has been strained by first-hand and horrifying reports reaching us from Borno, Yobe, Adamawa, Taraba, Kano and Kaduna states about the mass slaughter of fellow Nigerians; the burning and sacking of whole villages and churches and rectories. Families and individuals are forced to seek places of refuge outside their invaded homes and lands. “As Nigeria tragically bleeds and burns, we Bishops are really alarmed at the scale of human, material destruction, and the disruption of village and community life with increased levels of hatred and potentials for more conflicts in the nation. While Muslims are sometimes targets of these destructive attacks, Christians Churches and non- Muslims in general are the principal targets for extermination, expropriation and expulsion by the Boko Haram insurgents, the perpetrators of all these destructions.” They called on Nigerians to recognize the grave danger facing every citizen and Nigeria from within and from without. “The issue is not about who becomes president or governor or senator after the 2015 General Elections,” the statement said. “The issue is about the life and security of every one of us who loves his or her life and really cares about our living together in peace as noble Nigerians.” They therefore urged all citizens to support and encourage every positive effort by the current government to protect every Nigerian and defend the integrity and unity of Nigeria, and to equally take lawful measures locally to prevent the destruction of fellow Nigerians and ward off Nigeria’s destroyers. They Bishops said they have mandated their CARITAS (charity/emergency) office to immediately provide funds and succor to all affected peoples as is within their capacity. They also urged governments and every endowed Nigerian to reach out in charity and solidarity to rehabilitate and support our displaced brothers and sisters wherever they are and so sustain our God-given human dignity. The statement was signed by the Most Rev. Ignatius Ayau Kaigama and the Most Rev. William Avenya, the President and Secretary respectively, of the Catholic Bishops Conference of Nigeria. *Source Sahara Reporters]]>