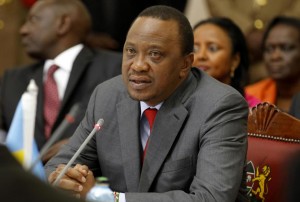 Kenyan President Uhuru Kenyatta attends a ceremony in Nairobi on May 11, 2014 (AFP Photo/)[/caption]

The Hague (AFP) – Kenyan President Uhuru Kenyatta’s chances of having to stand trial for alleged crimes against humanity dropped sharply Friday when the ICC prosecutor requested an indefinite delay in the case.

“The prosecution respectfully submits that the appropriate course of action is to further adjourn the case until such time the government of Kenya executes the (prosecution’s) revised request in full,” Fatou Bensouda said in papers filed at the Hague-based court.

“The situation is the same as when the prosecution sought a (previous) adjournment of the trial…. The evidence is insufficient to prove Uhuru Kenyatta’s alleged criminal responsibility beyond reasonable doubt,” Bensouda said.

The trial of the Kenyan leader on five counts related to post-election violence dating back to 2007-2008 has been dogged by repeated delays.

Most recently, judges in March postponed the trial start to October 7 in order to give Nairobi a chance to look for requested financial documents, in an apparent final push by prosecutors to form a case against the powerful African leader.

Prosecutors hope the documents — among them company records, bank statements, records of land transfers, tax returns, phone records and foreign exchange records — will prove a link between Kenyatta and the deadly unrest in 2007-08 in which 1,200 died and 600,000 others were displaced.

“The prosecution notes with regret that the full and effective compliance required of the government of Kenya and anticipated by the Chamber has not materialised to date,” said Bensouda.

So far, prosecutors received only 73 pages of documentation with “some… not responsive” to the request. 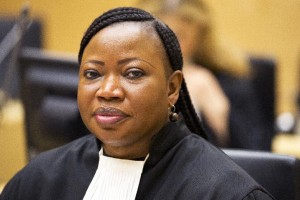 Fatou Bensouda, pictured in the Hague in May 2014, said prosecutors are not dropping the five counts against Uhuru Kenyatta, saying that would be “inappropriate” (AFP Photo/)[/caption]

“Even the responsive material is a fraction of the information sought,” Bensouda added.

Kenyatta, Bensouda added “is the head of a government that has so far failed fully to comply with its obligations to the court.”

Judges could now also rule that Kenya is refusing to cooperate and refer the matter to the ICC’s Assembly of States Parties.

Bensouda stressed that prosecutors were not dropping the five counts against Kenyatta, ranging from murder and rape to deportation and persecution following the vote in his East African state, saying that would be “inappropriate”.

The trial of Kenyatta, 52, and that of his rival-turned-partner Kenyan Vice President William Ruto, who faces similar charges, have been repeatedly hampered.

These include accusations of witness intimidation and witness withdrawal, false testimony, and an international campaign by Kenya to have put the trials on hold.

African leaders frequently complain that the ICC discriminates against their continent.

Arguments include that Kenya’s leaders need to be available to tackle Al-Qaeda-linked militants who have turned neighbouring Somalia into a major jihadist hub.

Kenyatta has lobbied intensively to muster support against the tribunal and his lawyers have previously slapped down Bensouda’s allegations, saying the case has collapsed.

Both Kenyatta and Ruto maintain their innocence.

The post-election violence shattered Kenya’s image as a beacon of stability in east Africa in late 2007 when then opposition chief Raila Odinga accused then President Mwai Kibaki of rigging his way to re-election.

What began as political riots quickly turned into ethnic killings of Kenyatta’s Kikuyu tribe, who in return launched reprisal attacks, plunging Kenya into its worst wave of unrest since independence in 1963.

Meanwhile in Kenya the news of yet another request for postponement was met with both frustration and celebration, depending on allegiances.

Many Kenyan victims of the violence said they had resigned themselves to simply try to forget the “dark chapter” of their past.

“For years we have waited for the elusive justice after we were attacked,” said Amos Otieno, whose younger brother was killed during the clashes in the farming town of Navaisha, 90 kilometres (55 miles) north of Nairobi.