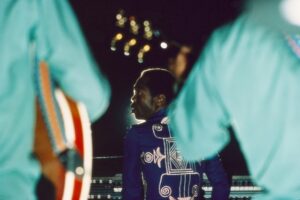 “I don’t want to jive you here tonight, brothers and sisters. I want to present myself as an African. I want you to look at me as something new that you do not have any knowledge about, because most – 99.9 per cent – of the information you get about Africa is wrong.” So begins Finding Fela [official website], an intriguing new documentary about the life and legacy of the Nigerian saxophonist and band leader Fela Anikulapo Kuti.

In this grainy film clip, Kuti is in his prime – snake-hipped and handsome, dressed in a brightly patterned suit and addressing a packed auditorium of well-to-do white faces. Fast-forward to the present day and it is difficult to consider this artist without at least a few preconceptions. As the creator of Afrobeat – an infectious fusion of Ghanaian highlife, jazz, funk and soul – Kuti spent the better part of three decades bringing the culture and concerns of his continent to the global stage. Since his death in 1997 at the age of 58, he has become a totemic figure, known as much for his outspoken politics and unconventional personal life as his work.

In 2008 Kuti even became the unlikely subject of a New York musical. Conceived by the choreographer Bill T Jones, the businessman Steve Hendel and the director Jim Lewis, Fela! included condensed versions of Kuti’s most popular music performed by the respected Brooklyn-based Afrobeat ensemble Antibalas and sung by actor Sahr Ngaujah, who took the lead role. The show proved a hit and, after securing the financial backing of stars including Jay Z and Will Smith, soon moved to Broadway. The birth of this production forms the frame for the Academy Award-winning director Alex Gibney’s film: the point at which he and many of those involved in the project begin to uncover not just what Kuti was about, but also the secret to his enduring appeal.

While Kuti is often portrayed as a maverick outsider, the truth is that he was born into a privileged and well-connected family. His father Israel was a Protestant minister and his mother Funmilayo a political activist and champion of women’s rights. His brothers Olikoye and Beko would respectively become known as Nigerian health minister and a prominent human rights campaigner, and his cousin Wole Soyinka was awarded the 1986 Nobel Prize in Literature.

Kuti played piano and drums as a boy, but his parents had set their hearts on him becoming a doctor. In 1958 he moved to London to study medicine – a subject for which he showed little aptitude. He wound up at Trinity College of Music, fell in love with jazz, formed the band Koola Lobitos and married his first wife Remi.

When the couple returned to Lagos in 1963, he reformed his band and set about carving out a career as a radio producer and entertainer. Although he met with some success as a musician, Kuti was never satisfied with the songs he was playing and believed Nigeria needed a new sound all of its own. It would, he decided in the late 1960s, be known as Afrobeat.

These events are all meticulously detailed in Finding Fela, accompanied by archive footage of live performances and interviews, behind-the-scenes glimpses from the Broadway production and commentary from fans including Paul McCartney and Ahmir “Questlove” Thompson of the hip-hop collective The Roots. The film also explains how a trip to the United States in the late 1960s catalysed Kuti’s transformation from musician to political firebrand.

When Kuti took Koola Lobitos to America in 1969, he was already captivated by the heavy soul and disciplined band leadership of James Brown, but his experience of the burgeoning African-American struggle for civil rights added a vital sense of urgency to his new musical template. Returning to Lagos with Sandra Smith – a beautiful young member of the Black Panther Party whom he neglected to tell that he was already married – he renamed his band Nigeria 70 (and later still Africa 70) and began releasing challenging albums that often consisted of a single track on each side. To maximise the penetration of his messages, Kuti decided to deliver his songs in pidgin, one of Africa’s most widely spoken languages. Afrobeat didn’t just set dance floors alight, it confronted the corruption and violence of Nigeria’s military government in an unprecedented manner.

Not content with releasing a barrage of propulsive, polyrhythmic tirades against a heavily armed dictatorship – including the albums Roforofo Fight, Gentleman and Expensive S*** – Kuti set up his own nightclub called The Shrine, where hundreds of fans attended concerts, elaborate word-sound rituals and discussions of African identity, personal empowerment and political resistance. He also took out a series of full-page ads in national newspapers that heaped invective on those in power. Then he built a compound for himself and his entourage which he declared an independent country named the Kalakuta Republic.

“Fela was always very single-minded. The word ‘compromise’ just didn’t exist in his dictionary,” says Rikki Stein, the associate producer of Finding Fela and Kuti’s manager for 15 years. “I respected him. I knew what he’d been through, I knew the sacrifices he’d made and I knew what underpinned his decisions. The thing that attracted me to him when we first met, what really drew me in, was his candour. That’s a much fatter word than honesty – you know, there was just this transparent way he had of dealing with things.”

This honesty and openness was not without its downsides. As a Broadway musical, the plotline of Fela! necessarily omitted some of the more problematic aspects of its subject’s life – for instance, his questionable attitudes towards women and his refusal to acknowledge the existence of Aids in Africa, even though the disease was slowly killing him. In Finding Fela, though, Gibney addresses these issues with admirable straightforwardness. Eccentric acts of publicity seeking, such as Kuti’s decision in 1978 to marry 27 female members of his inner circle at the same time, are examined in the context of their impact upon his existing family. Meanwhile, his appetite for grandstanding provocation is presented as both inspiring and reckless.

This is especially poignant, given the footage of the 1978 raid on the Kalakuta Republic ordered by General Olusegun Obasanjo. It was no coincidence that this assault came shortly after the release of Zombie, Kuti’s incendiary attack on the methods of the Nigerian military. One thousand armed men stormed the compound, members of the community were beaten and raped, the property was burnt to the ground and Kuti’s mother was thrown from a third-floor window. Her injuries were so severe that she fell into a coma and died shortly after.

This was a loss from which Kuti would never recover, but his response to the tragedy was not one of submission. Instead, he led a procession through Lagos and eventually delivered his mother’s coffin to the Dodan Barracks in Lagos, where Obasanjo lived. The song Coffin for Head of State was also written as a tribute to her lifelong commitment to political change.

While Finding Fela pays ample homage to Kuti’s talent and fearless activism, Gibney avoids the trap of reductive hagiography by showing his subject to be a man who was both fascinating and flawed. The film also addresses the irony that, no matter how many concert halls he filled or records he sold, Kuti has achieved a far greater level of recognition in death than he ever did in life. Looked at from a slightly different angle, though, the growing popularity and longevity of his work can be viewed as the ultimate validation.

For Stein, this remains a bittersweet consolation. “The sad thing is that if you go to Nigeria today, the same mess still exists as when I first went out there with Fela all those years ago,” he says. “The same confusion, the same problems with education, water, health. Then again, that’s what makes his music so relevant to people now – and I don’t just mean in Nigeria, but the world over. The same issues still matter. We still need transparency and social justice, and we still need to speak truth to power. Those are the things that Fela fought for.”