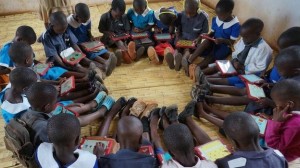 An app designed to help provide a better education for children in Malawi has proved an equally effective learning tool for pupils in the UK. In six weeks, children made the same progress in maths as expected after 12 to 18 months of teaching.

It will be an emotional time at my house, when my four-year-old son goes to “big school” for the first time. As well as wondering where the last four years have gone, and being petrified that he will miss us more than we miss him, there is that niggle about how he will take to schoolwork. How well will the teachers engage him and ensure he is not left behind? Although I always assumed technology would play a major role in his education, I certainly didn’t expect him to get a boost from a tool originally designed to provide Malawian children with a better future. But this is now a possibility, after pupils in Nottingham using a maths teaching app from the charity Onebillion advanced their learning at the same rapid rate as those in Africa, for whom it was originally designed. Education in Malawi is basic and overstretched. Classes of 90 are the norm, and in some instances as many as 300 pupils share just one teacher. The situation has become worse following a recent population boom that means nearly half the country’s population is below the age of 14. One-to-one teaching has become unthinkable, a luxury that the country’s schooling system has been unable to provide. This is precisely what inspired Andrew Ashe to co-found Onebillion, a charity which aims eventually to help educate all of Malawi’s children with its maths teaching app. “If you haven’t got access to basic education – if you’re not even numerate – you can’t do anything,” he tells me.

At Biwi Primary School in Lilongwe, Malawi’s capital city, a trial programme is taking place where the children are each given 30 minutes a day on a tablet running the app. It’s simple and fun, but rigorous too – demanding a score of 10 out of 10 on the exercises before one can progress.

Teacher Lioness Sulouma certainly appreciates the help. “It’s difficult to teach a big class,” she says. “We don’t have enough teaching materials. Pupils cannot understand, and they make a lot of noise.” 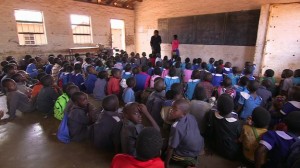 This is in stark contrast to the room where pupils are using the tablets. They sit quietly, listening through headphones to the instructions in the local language, Chichewa, and tap away at the screens. So far, so philanthropic – teaching apps are not new, and neither are projects supplying tablets to Africa. But this app is unusual. It caught the attention of researchers at Nottingham University, who wanted to see just how effective it was at boosting learning. They submitted it to a randomised control trial, testing it against other teaching apps and against no app at all. The Onebillion app improved the children’s maths knowledge to a much greater extent than the alternative apps, and – no surprise here – produced considerably better results than the average Malawian class with a pupil-teacher ratio of 90-to-one.

And it didn’t stop there. It turns out the app works just as well in the UK, even with class sizes of no more than 30, where a teacher is – at least in theory – able to give more attention to each child.

In fact, six weeks’ use of the app was found to accelerate the maths learning of the children by between 12 and 18 months. I visited Dunkirk Primary School in Nottingham, where the University of Nottingham’s psychology professor Dr Nikki Pitchford conducted the trial, duplicating the one in Malawi. “What was so incredible was that in both countries we saw the same gain. One week of working on the iPads for 30 minutes a day [equalled] three months of formal education,” she told me. “We were amazed.” Keeping a four-year-old focused on anything for more than a few minutes is something I – and mainly my wife – battle with during most of our time at home. But Nikki’s theory as to why the app works so well across the digital divide makes a lot of sense to me – it involves big yellow on-screen ticks and musical fanfares. “The children get immediate feedback on getting a question right. That’s really rewarding. And if they don’t get it right, they can’t progress. They have to get 10 out of 10 to pass and move on to the next one.”

Picturing the near-Armageddon that occurs when my own son can’t master something within five seconds, I ask why the children aren’t discouraged or frustrated if the demand for full marks keeps them stuck on a problem. 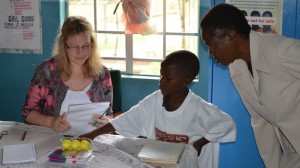 “They tend not to do that, because the app’s very engaging. They like playing it,” she explains. “I’ve even had older children who passed all the certificates go back to the earlier games.”

An obvious next question has to be whether the app is in fact better than a teacher. Nikki insists that the tablet is just a way of supplementing teaching by engaging children in a different way.

Dunkirk Primary teacher Rachel Jurkiw agrees: “In today’s society, we have to teach children ICT because it’s so important in future careers. The earlier we teach them, the more successful they are later on in their ICT skills.”

And after 30 minutes, she told us, most of the children have had enough and want to go and play outside. Reassuring for anyone who, like me, would rather not have a child who prefers apps to apples.

As one of many parents who will go through the emotional wringer over the coming weeks, it’s easy to forget that during his life my son will have an education of which many children can only dream. Onebillion’s mission is to change that, and give those growing up in the poorest places a good educational grounding and a fighting chance. This particular app gives children the very basics in maths, without assuming any previous formal teaching. In the UK that puts it in the hands of four- and five-year-olds. In Malawi, that could apply to children of any age. And for once, it’s nice to see that something originally designed for the developing world may have hit upon a way of giving all children a better start. *Source BBC
]]>