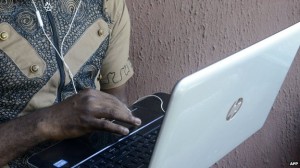 When it comes to providing work for idle minds, the devil seems to have a particular fondness for Nigerian youths, especially around election times. Most elections conducted in Nigeria over the past decades have been characterised by thuggery. Politicians turn to the country’s pool of unemployed millions to recruit young people who will aid their democratic ambitions.

These youths are then trained and empowered to manipulate the electoral climate.

Their job description includes anything from intimidating political opponents to seizing ballot boxes and clobbering uncooperative electoral officers. But times are definitely changing. Rather than supplying them with machetes, missiles and matches, Nigerian politicians are now arming their hirelings with laptops, smart phones and internet connections. Political thuggery has gone digital. As Nigeria gears up for the 2015 general elections, squads of young people are being recruited across the nation to storm cyberspace: To harass, intimidate and persecute their employer’s opponents or those with views that oppose his ambitions. For many Nigerian youths, being an “internet warrior” is a full-time job.

Some work from home; others work from an office – many work round the clock.

I spoke to a 28-year-old chemistry graduate who patrols the online war front for one of Nigeria’s popular politicians. Every morning, he gets dressed and embarks on a 20-minute drive to work, where he sits in an office with dozens of other young people on the same mission as himself. With a burst of laughter, he summarised his job description in three words: “Distort public opinion”. He and his colleagues have about 10 different pseudonyms each for news websites and blogs, but fewer for Facebook and Twitter. They bombard articles about their politician with positive comments, and blast those of his opponents with negative posts. “I usually use corruption and ethnicity to attack,” he said. [caption id="attachment_12316" align="alignright" width="300"] 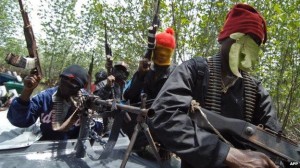 The Niger Delta militants grew out of the remnants of young men armed by campaigning politicians[/caption] Some months ago, he was engaged in the exact opposite: Maligning his current employer. At the time, he was working in an enemy camp, but the pay and conditions were not as favourable as those offered him now. “They had promised us jobs,” he said, “but when the time came, they offered all the positions to people from their constituency.” No broken bones

Another young man told me that certain online platforms, especially newspapers, block any comments his team members post in support of their candidate.

Others allow support for his principal, and disallow negativity from enemy camps. It all depends on whose payroll the newspaper’s online editor has been signed. These internet warriors, while not stealing ballot boxes or bullying electoral officers, are manipulating the electoral climate. Public opinion is being rigged. At this rate, the forthcoming elections will be full of many surprises, especially for those who depend on online forums to gauge Nigerians’ sentiments on any issue. Meanwhile, the multitude of Nigerians who actually go out to stand in the rain or sun for hours to vote on election day, often do not have internet connections in their shacks. Being an internet warrior certainly comes across as a more acceptable form of thuggery than ripping shirts and hurling stones in the streets. Brain instead of brawn. No bones broken, no limbs amputated, no blood shed, no lives lost. Broken promises The pseudonymous adversaries may even be best friends. At the close of business, they shut their laptops and meet at the pepper-soup joint down the road for a stout, the day’s vicious tasks safely behind their screens. But what will become of all these recruits when the 2015 battles have been lost or won? Despite the promises that may have been made to them, not all will be given better jobs or government appointments. [caption id="attachment_12317" align="alignleft" width="300"] 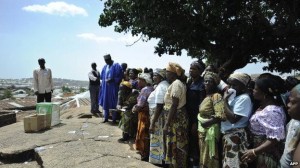 Many voters in Nigeria will not have access to the internet[/caption] The Niger Delta oil militants who terrorised southern Nigeria a few years ago were reported to be thugs used during election campaigning who suddenly found themselves jobless – but adequately armed after the ballots had been cast. Some of the Boko Haram insurgents currently terrorising the north were also born out of a similarly expired campaign contract. Increased armed robberies, kidnappings and assassinations in different parts of Nigeria after elections have also been linked to youths with weapons who find an alternative use for them. I wonder what these armies of young Nigerians will do with their laptops, smart phones and internet connections after the 2015 electoral battle – which many politicians view as Armageddon – is over. *Source BBC
]]>