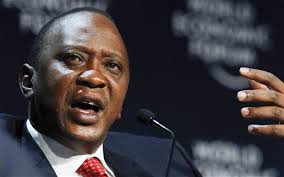 THE International Criminal Court said Friday it had summoned Kenyan President Uhuru Kenyatta to appear before the tribunal over charges his government has withheld documents requested by prosecutors preparing his crimes against humanity trial. Kenyatta, who faces five counts at the ICC over his alleged role in masterminding election-related violence in 2007-2008, was ordered to appear on October 8, the Hague-based court said in a statement. It would be the first time Kenyatta has appeared in court, as he has repeatedly argued he needs to remain in Kenya to fight militants from the Al-Qaeda-linked Shebab group, and manage state affairs. The ICC said discussion with Kenyatta, and another hearing a day earlier with a Nairobi representative, would focus on “the status of cooperation between the prosecution and the Kenyan government and issues raised in the prosecution’s notice of 5 September 2014”. “A representative of the Kenyan government is invited to attend the first status conference and Mr Kenyatta is required to be present at the second status conference,” it said. Prosecutor Fatou Bensouda asked judges to postpone the trial indefinitely, blaming Kenyan authorities for blocking access to key evidence that could show Kenyatta had bankrolled the post-election ethnic violence in which 1,200 people were killed and 600,000 others were displaced. Without those documents, she said, there was insufficient grounds to prosecute the powerful East African leader, prompting his lawyers again to call for the case to be dropped. Nairobi has rejected claims it has stonewalled the ICC in refusing to hand over the documents, including company records, bank statements, records of land transfers, tax returns, phone records and foreign exchange records. The ICC also formally postponed the latest opening date — October 7 — for Kenyatta’s repeatedly delayed trial. The trial of rival-turned-partner, Kenyan Vice President William Ruto, who faces similar charges — opened in the Hague in September 2013. Lawyers for victims of the 2007-2008 violence have lambasted Nairobi authorities for a “deliberate policy of obstruction”, while Amnesty International has highlighted the desperation of victims who were wounded and lost property during the unrest. The events shattered Kenya’s image as a beacon of stability for the region in late 2007 when then-opposition chief Raila Odinga accused then President Mwai Kibaki of rigging his way to re-election. What began as political riots quickly turned into ethnic killings of Kenyatta’s Kikuyu tribe, who in return launched reprisal attacks, plunging Kenya into its worst wave of unrest since independence in 1963. *Source newvision]]>