“When we were starting out, if you were a woman and you went to the bank for a loan, they wanted to know who you were married to and whether you had permission to be in business,” says Terry Mungai. 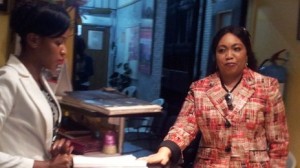 Terry says she wants to help other women become entrepreneurs and create jobs[/caption] Terry, the founder and chief executive of Ashleys Kenya, a beauty company with more than 240 employees, adds: “But now all that has changed. You are considered an entrepreneur.” Twenty years ago when her then-employer, Diners International, quit Nairobi she did what she had always wanted to do, and opened a hair salon. Today, walking around one of her 12 hair salons in the upmarket Lavington area of Nairobi, she greets her clients with a broad smile as she moves along the row of hairdryers. Towards one corner of the room, three hairdressers hover over a customer as they twist and turn her hair braids. In a partially enclosed area, another woman enjoys a manicure and pedicure while sipping orange juice. The pampering is part of the company’s mission statement – to be the most professionally run chain of salons in Kenya. And it is not just the customers who are getting a makeover – so are Terry’s recruits. Training the future As her business grew she realised there was a need for a larger skilled workforce. “We realised that we could not sustain the business without training,” she explains. Terry now runs three training centres under the Ashleys brand that offer her students internationally respected beauty qualifications. The training centres also offer services to members of the public as a way of providing real-life experience to the students. There is a hushed tone in one classroom as students undertake a mock examination in hairdressing, a teacher is watching keenly as the students work. [caption id="attachment_11893" align="alignright" width="300"] 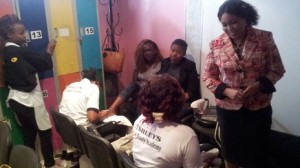 Terry realised if she wanted to grow her business she needed more staff and has set up her own training academies[/caption] Within two weeks the students in this class will undertake their final examinations before graduating. Some of the students who graduate from the training centres are taken on by Terry while others are hired by other companies. Beauty queen Ashleys is also the current holder of the local franchise of the Miss World beauty pageant – known as Miss World Kenya.

“We were sponsors for two years and when they were ready to change the franchise holder, they approached me, and asked whether we would be interested,” says Terry.

Auditions for Miss World Kenya are usually carried out in different parts of the country before a final elimination round is held and the overall winner announced. “I have a bias in trying to bring up young women to have confidence in themselves and create employment. I want women to celebrate their beauty,” she says. But it hasn’t all been easy. [caption id="attachment_11894" align="alignleft" width="300"] 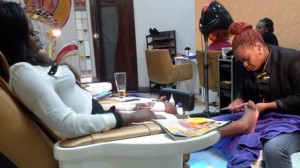 Terry Mungai’s ambition is to run the leading chain of salons in Kenya[/caption] After the terrorist attack at Nairobi’s Westgate shopping centre in September 2013, in which more than 65 people were killed, the company was forced to shut down one of its branches, which was located in the complex. Terry has since opened a new branch in a different mall and the staff have been relocated. Retail opening Not content with 12 salons, three training schools and running the national beauty pageant, she is also heading into retail. The first Ashleys cosmetic shop has already opened in Nairobi. “It makes it easier for clients and other outsiders to come and get premium products from us,” she says. “Now that we have ventured into cosmetics, I would not rule out Ashleys starting our own line in the future.” *Source BBC]]>