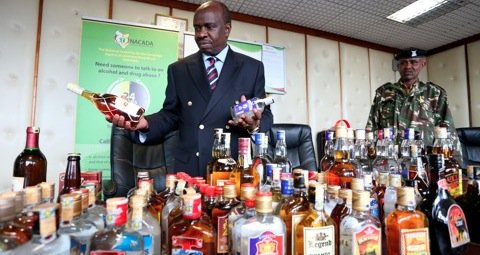 John Mututho, wondering what to do with confiscated bottles. Photo©Billy Mutai for Nation Media Group[/caption] The activities of Kenya’s chief prohibitionist have cast a pall over drinking culture in Kenya, driving the middle classes to underground and devious means of enjoying a friendly beer. Five years ago, a fairly innocuous- sounding bill aimed at regulating the production and distribution of alcohol arrived in parliament to the sonorous sounds of members drunk on their own self-regard. Just a bill to save the sinners, the moral majority agreed. It was certainly not something for nice middle-class people to worry about. This, as it turned out, was a grave mistake. The alcohol Drinks Control act marked the dawn of what many Kenyans have come to regard as the ‘age of Prohibition.’ Its architect was a teetotaler by the name of John Mututho. Few knew his origins. He won a seat for Naivasha in parliament in 2007. He was soon in trouble on an old corruption charge, perhaps a backlash against his views. The case is ongoing. When Mututho got going, the drinking landscape would never be the same again. The ‘Mututho Laws,’ as the act and subsequent laws are known, limited sales of alcohol, bar and nightclub hours and how and where alcohol could be consumed. In a country where so much is honoured in the breach, it is a testament to the dedication of this crusader that the Mututho Laws are perhaps the most effectively implemented ones in the land. It was something of a national drinkers’ day of celebratory rage when news emerged in March 2013 that Mututho had been walloped at the polls. The joy was short lived because President Uhuru Kenyatta appointed him to the helm of the National authority for the Campaign against alcohol and Drug abuse (NACADA). Mututho has not appreciably turned the nation’s palette against drink, but drinking is now mostly underground. This was affirmed most recently when a bad batch of chang’aa – a drink whose name means ‘kill me quick’ – killed more than 60 people in May. What he has done at NACADA, however, is further crusade against the middle-class penchant to drink and drive their bright new cars. These days, in Nairobi, Mombasa and other cities, the bogeyman of the late-night drink-driver is a thing called Alcoblow, a machine operated by a battery of multi-agency law enforcers. The unwary tippler will be surrounded by men in luminous jackets leaning into his open car window and politely interrogating the quality of his breath. Satisfied that he has ‘taken something,’ they then oblige him to blow into the Alcoblow. If he is lucky, there will be no TV cameras to display his embarrassment before the nation. He will be bundled into a cell – urine-scented and resounding with emergency phone calls to friends, themselves in the bar from whence he came. Then there is a fine. Depending on the mood of the magistrate, it ranges from $250 to $700. Nairobi’s social life has moved into private homes. There is talk of the return of fascism. People shake their heads in anticipation of East African Breweries’ next annual report. Mututho had not banked on the middle classes, their deep sense of entitlement and a strongly held culture of bar-room impunity. Soon after Alcoblow came into being a Twitter collective emerged warning drivers where the checkpoints were. For the less tech-inclined, taxi-drivers will take you past the checkpoint then hand you back your car, taking a bodaboda back to the bar. A story appeared recently that Mututho was abusing his expense accounts. It made front page news. The nation awaits with a sharp intake of (beery) breath. *Source theafricareport]]>