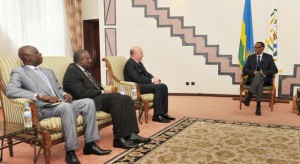 President Kagame meeting AU and IN envoys at his office in Kigali, Rwanda on Thursday[/caption] Rwanda President Paul Kagame has held talks with the African Union Commissioner for Peace and Security, Amb. Smaїl Chergui and Amb. Said Djinnit, the new UNSG Special Envoy to the Great Lakes Region over security in the region particularly the threat posed by FDLR to stability in the Great Lakes. According to the presidency, the Thursday discussions mainly focused on ways of dealing with FDLR, a major negative and genocidaire force that has terrorized the region for decades. Leaders from International Conference on the Great Lakes Region recently met in Angola to review the political and security situation in Eastern DRC regarding the continued repatriation to Rwanda of FDLR for those willing to disarm and return voluntarily; and engage urgently military action against those unwilling to disarm. While FDLR this year announced intentions to surrender, officials said it simply handed over sick and young combatants and outdated guns. Rwanda’s United Nations representative, Richard Gasana recently told the SecurityCouncil that the neutralization of the 1994 Genocidal Movement is “another area of extreme importance, which unfortunately has not seen progress.” Joint efforts Speaking to the press after meeting President Kagame, Amb. Djinnit said his core responsibility in the region would be to work together with regional organizations and countries including Rwanda especially in the implementation of the Peace andSecurity Framework. “There has been some significant progress over the last decade but there also some outstanding issues like the FDLR,” said the envoy. “I will be working in transparency and respect of all countries and will seek the goodwill and support of the stakeholders and demand that they take their obligations at all levels.” On the issue of the FDLR, said Djinnit, “we will be guided by the decisions of theSecurity Council and the region which have taken a very clear position on the issue.” The UN Envoy reiterated that the military option was still on the table, should FDLR fail to comply with the decisions of the UN Security Council and regional stakeholders. The Minister of Foreign Affairs, Louis Mushikiwabo said despite the progress in resolving issues of the region peacefully, there have been invisible hands that tend to frustrate these efforts. “We Rwandans need peace and we have worked for decades for peace and this will not stop. We will continue as a country to contribute to peace in the region and for ourselves,” said Mushikiwabo. The Minister pointed out that FDLR is not a difficult force to deal with, saying what is needed is political will. “And we are happy to receive Ambassador Djinnit who has taken over from the very able Mary Robinson and we are happy that he is a man who knows the region’s history and has been part of the African Union from the beginning,” said the Minister. The discussions also touched on the East African Standby Force (EASF) and the situation in the Central African Republic. East Africa Member States have committed 5,000 military and police forces. Burundi contributed an Infantry Battalion, Kenya a Mechanized Battalion while Ethiopia, Rwanda and Uganda contributed a Motorized Battalion each. Other Combat Support and Combat Support Services pledged include Two Level Two Hospitals, CIS, Combat Engineers and Special Forces. The Member States also pledged four Formed Up Police Units, Military Observers and Individual Police Officers. The Pledged Forces are to be on Standby to deploy in a period of 14 days whenever called upon to maintain peace and stability in the region.  The regional Ministers of Defence and Security in August signed an MOU of pledged Forces as directed by Assembly of Heads of State and Government. The FDLR have up to February 2, 2014 to surrender or face fire. The Angola meeting demanded “FDLR to fully surrender within a given timeframe and also making them aware of military consequences of failure to comply with the agreed timeframe.” *Source chimpreports]]>