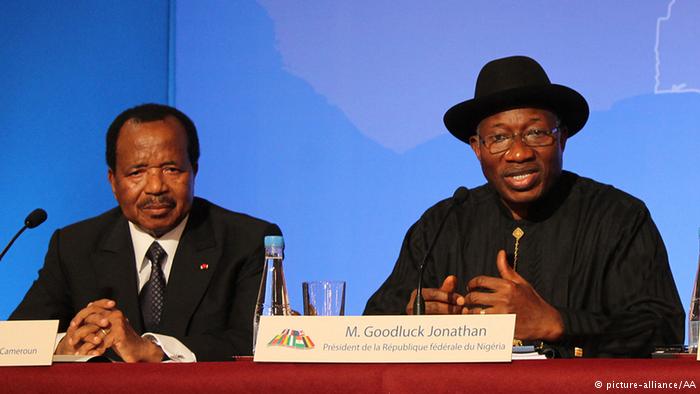 Biya of Cameroon and Jonathan of Nigeria[/caption] So it is been reported with more certainty that Shekau or the guy who use to pass around for Shekau is now dead. All the bravado in those videos, standing behind armored tanks and using innocent girls in his background was all for nothing. No doubt the guy could barely read well. His absence will certainly not be missed .Any individual or cause which takes delight in ambushing innocent civilians, preaching hatred and kidnapping innocent girls is not worth the trouble at all. As news of Shekau or his double makes the rounds, the tussle for credit as to who killed him is subsiding. Was it the Nigerian Military or their Cameroonian counterparts? Although claims from the Cameroonian side have remained low, there was information from social media last weekend that the fellow passing around for Shekau was dead killed by Cameroon arm forces. The news was accompanied by pictures on a military face book page. However, the Nigerian side came up with a forceful arguments culminating in a formal announcement from the military top brass that indeed, the gentleman known for the taunting visitors met his waterloo at the hands of the Nigerian military as the sect tried to get into Konduga. “The troops captured some of the terrorists and their equipment.  In the course of those encounters, one Mohammed Bashir who has been acting or posing on videos as the deceased Abubakar Shekau, the eccentric character known as leader of the group died.    Since the name Shekau has become a brand name for the terrorists’ leader, the Nigerian military remains resolute to serve justice to anyone who assumes that designation or title as well as all terrorists that seek to violate the freedom and territory of Nigeria,” a statement from the Director Defense Information, Major General Chris Olukolade. The forces doing the fighting deserve a lot of credit irrespective of which party got him. It is hard to understand how things metamorphosed to this level, but there are so many unanswered questions about Boko Haram and its supersonic rise. How comes the sect has evolved to the point where it can threaten to go toe to toe with the Nigerian military? Nigeria is a country that has been laying claim to a security seat on behalf of Africa, it has flexed its muscles in peace keeping missions from Liberia to Sierra Leone and its military was supposed to be one of the best trained and equipped in the continent. If the giant of Africa is unable to protect its citizens from Boko Haram, how can the rest of Africa rely on it for their security? Who is training the Boko Haram folks, where are their funds coming from, how and from where are there able to obtain fire power superior to that of the Nigerian military in many instances? [caption id="attachment_12366" align="alignright" width="300"]

Cameroon’s Paul Biya and French Foreign Minister Laurent Fanius celebrate the liberation of the molin-Fournier family last April. The wife of Vice Prime Minister Amadou Ali was kidnapped in August and has not been returned.[/caption] In Cameroon, the situation in the Northern part of the country remains preoccupying. Hardly had the dust settled on the first armed incursions of the sect when President Paul Biya declared that Cameroon was at war with the sect. Cameroonians grew curious about Boko Haram when a French family vacationing in the Northern part of the country was kidnapped. The Molin-Fournier family was released after some two months in captivity and the Cameroon President received the family before their departure to France. Though the French President indicated that no ransom was paid to release the hostages, it turned out that huge sums were indeed paid to secure the release of the Molin Fournier family. How much was given to secure the release of this French family? How much was given to secure the subsequent release of other foreigners kidnapped? Who received the ransom, and was the money out of the Cameroon treasury or from the home countries of the kidnapped folks who have been released? What is the relation between Boko Haram in Nigeria and Boko Haram in Cameroon? Here again more unanswered questions. It was perplexing to see that instead of Jonathan doing the two hour or so flight to meet Biya in Yaoundé or Biya doing vice versa to Abuja, both leaders preferred to honor an invitation of the French President to discuss security challenges. It borders on the absurd that it will take an initiative of the French for Nigeria, Cameroon and Chad to meet and talk about common threats from Boko Haram? A few months back, the wife of Amadou Ali one of the most senior and influential members of the Biya government was kidnapped in an attack that killed several members of the ministers family. Ministers Ali’s wife is still a hostage of whatever group keeping her. Dr Stephen Davis a negotiator from Australia recently ruffled feathers in Nigeria by announcing the names of some sponsors of Boko Haram. Fingered in his revelation were former Chief of Army staff, General Azubuike Ihejirika and former Governor Modu Sherriff of Borno State. It may not have been news that people in leadership were backing Boko Haram but it was one of the few rare times that names have been called. After a largely unconvincing press conference to clear his name, to the chagrin of most Nigerians, former Governor Modu Sheriff was pictured with President Jonathan during a visit to Chad. The optics could not have been any worse, at a time when the press was rife with reports of the Nigerian military taken refuge on Cameroon to flee from attacks from the sect.   [caption id="attachment_12370" align="alignleft" width="300"] 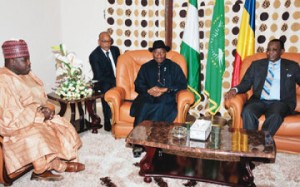 L–R: A former Borno State Governor, Ali Modu-Sheriff, President Goodluck Jonathan, and Chadian President, Idriss Deby, at a meeting in Chad. this was a few days after Sheriff was cited by the Australian negotiator Stephen Davis as a key sponsor of Boko Haram[/caption] In the midst of the chaos, the innocent Chibok girls are still missing and nothing is heard from the help that western powers promised Jonathan. With the recent victories of the Nigerian military, releasing the girls will not only bring relieve to aggrieved families, but will also boast that struggling credibility of the Jonathan administration. The biggest resource of every country should be its people and be it in Nigeria or in Cameroon, it is the people that are suffering most. It is unfathomable to understand that for all its wealth, the Nigerian military should be complaining of been ill equipped. This is one struggle which calls to test the leadership mantles of both countries. The struggle for Boko Haram needs no politics, it is not a Northern thing in Cameroon and succession politics should not mingle with it. It should not a North v South fight in Nigeria, or unscrupulous politicians using the sect to work on 2015 agendas of sorts. No one doubts the dent that Boko Haram has put on the continental and international aura of Nigeria, hopefully the recent victories give the military the momentum to actually take the fight to Boko Haram so it can become history. In both Nigeria and Cameroon, openness and transparency in sharing information will help. The people can read in between the lines too and  so far there have been too many missing links and unanswered questions in the whole Boko Haram fight. *Insights Africa is a Blog that seeks to de-complex the complexities of developments in Africa  ]]>