Friends of the Earth Liberia/SDI has been working with its partner organizations to provide Ebola prevention and relief for communities around Liberia. The severity of the outbreak has compounded existing strains on the Liberian health system and enormously disrupted daily life across the country. Friends of the Earth International (FoEI) interviewed Nora Bowier from SDI, who has been working with the Community Awareness and Support Team (CAST) Initiative to coordinate prevention and relief efforts. FoEI: How is the crisis affecting daily life and your family, friends and colleagues?

NB: The Ebola outbreak has affected the normal lives and activities of people. The impacts have  manifested in multiple ways, restraining movement, affecting businesses, causing more financial difficulties, instilling fear and panic, causing more sicknesses and deaths. Many continue to lose loved ones. Some families and friends have been more directly impacted, losing their love ones to Ebola and as the crisis continues, others have lost their jobs, as organizations including non-governmental have rapidly scaled down activities and reduced their work force as inflows of finance sputter out. Other friends have lost loved ones to other health conditions as the already under resourced health system deteriorates further because of the Ebola crisis. Medical centers are turning away the sick and major hospitals continue to reject patients who show signs and symptoms similar to the signs and symptoms of the virus. This puts the lives of more Liberians at risk. My close friend’s father was recently turned away from major hospitals in Monrovia despite needing urgent care. He eventually died. Commercial activities have also slowed down dramatically: market women, street vendors and retailers, who are amongst the low income earners, are bearing the cost. Although the government of Liberia is trying to enforce measures to avoid false spikes in prices, price increases of some commodities and services are inevitable due to the nature of the situation. For example, the cost of public transportation across the country has doubled. Prices of major commodities such as rice and cassava are climbing significantly. There are only two airlines still flying to Liberia. Traveling abroad has become difficult as airfares spike to twice their original price. Another serious aspect of the Ebola crisis is the stigma and its effects on people’s relationships with friends and families. Because of the nature of the disease and how it spreads, stigmatization has become an issue for people recovering from the disease within and among families living together. Family members are forced to treat each other with caution and isolation. Those who recover from the disease are often rejected by their communities and families. The situation has also affected school life. Right now, all school activities are banned. Students are all staying home mostly idle with nothing to do. People’s movements are restricted, either voluntarily or by force, in order to keep safe. Parents are finding it challenging to help their children keep busy. FoEI: How have you personally been affected by the Ebola crisis? [caption id="attachment_12139" align="alignright" width="155"] 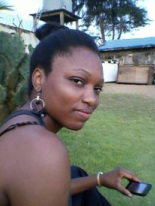 Nora Bowier is a 2006 graduate of Cuttington University of Liberia. She has several years of experience working on community rights and empowerment issues across Liberia and is currently working for the Sustainable Development Institute as a community rights campaigner on natural resource governance issues[/caption] NB: The Ebola crisis has been a set-back for me in my academic work. I returned from Ireland in June 2014, just when the situation began to escalate. I was in the process of writing my dissertation as a component of my MA studies, but as the virus spread it became impossible to continue my work I have become completely distracted. The death rate rises daily, killing more and more people including health workers. To date I have lost about five friends from the medical field. My attention has now shifted to the CAST initiative to support local rural communities’ prevention efforts. FoEI: How is SDI as an organization affected by the Ebola crisis? Are there staff members who cannot get to work? How has your work been affected? Has it changed the focus of your work? NB: The Ebola virus crisis has enormously disrupted normal activities. SDI has ceased all its activities including field based work as a result of the alarming rate at which the crisis is unfolding. In the interest of staff safety and because of the uncertainty we face, the management thought it wise to take a decision to make over 80 percent of the staff temporarily redundant  and send three expatriate staff home. Right now, we maintain only a small skeleton staff. This team of volunteers is now mainly focused on work SDI is doing in response to the Ebola crises. FoEI: What do you hear from rural communities that SDI works with? How is the situation there? NB: The impact of the virus is still comparatively low in most communities where SDI works. However, people are gripped with panic and fear about the possible spread of the disease, given that there are already suspected cases and a number of confirmed deaths in other parts of the counties where they live. Moreover, if the virus strikes in these areas, the impact will be more catastrophic. Health facilities are limited or nonexistent in most areas and people have no knowledge of how to respond or help themselves. Moreover, community members have expressed feelings of being abandoned because they received no help prior to the SDI visits. However, the CAST support and presence in these communities has brought some relief. FoEI: How is SDI / the CSO taskforce’s outreach work progressing? Which communities have you reached to date and with what kind of activities? NB: Under the CAST initiative we have visited 12 communities in the Jogban Clan and in Compound # one areas in Grand Bassa County. A total of 335 households have been provided with buckets, soap and chlorine. We have also provided information about Ebola and on prevention measures. The members of the taskforce are continuing to carryout similar activities mainly in the vicinity of Monrovia. The taskforce is also creating a situation room that will serve as a repository for information dissemination which will feed into the development of a weekly brief on the various work of CSOs responding to the Ebola crises. CAST and the CSO taskforce have expanded their coordination with the National Civil Society Council of Liberia, an umbrella network of civil society organizations in Liberia and the Liberia Religious Council. SDI and members of the taskforce were already a part of the CSCL. The focus of this is specifically placed on coordinating CS response to Ebola in terms of information sharing, advocacy and joint action and engagement with stakeholders including the National Task Force, INGOs, such as Doctors Without Borders, and those directly involved with the fight against Ebola. *Source foei]]>