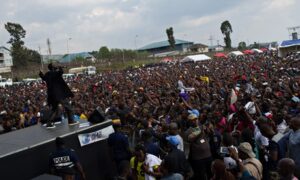 Josiane Nzuki, 15, raised her hand, took the microphone, and asked the organisers of Sunday’s peace concert in Goma, featuring Akon and Jude Law, why they thought the Congolese city was the best place to hold it. It is the people in the Democratic Republic of the Congo’s provinces who live without peace, with commonplace sexual violence and without basic services or vaccination campaigns. It is in the rural areas that young people are lured or forced into association with armed groups. “It would be better to take this to where people are suffering, and for the organisers to see the reality,” she later explained. The organisers smiled, and dodged her question, saying Goma was simply the best place for it. “I wasn’t happy,” she said. “But I’m a child – I can’t debate with Akon. So I thought, OK, I asked my question, and some people understood what I was trying to say.” Sixteen years ago, a British actor called Jeremy Gilley had an idea to create “the first ever day of peace”, as he calls it. He persuaded the UN general assembly to create the day, on 21 September, which was unanimously adopted. “Who will you make peace with today?” was the tagline of the concert held in Goma last weekend. Gilley makes films about bringing Peace Day to the world. His organisation, Peace One Day – a London-based team of 45 people – is funded by corporate sponsorship, humanitarian donors and film sales. In September 2007, Gilley and Law travelled to Afghanistan to call for a ceasefire, and secure a promise from the Taliban not to target healthcare workers for one day. They returned for three subsequent years and noted a marked reduction in hostilities. This year, Gilley brought Peace Day to Congo, but critics were quick to point out that you cannot call a ceasefire here. A UN staffer in Goma, speaking on condition of anonymity, described the festival as “a commercial act disguised as humanitarianism. If they announced a commercial event, by saying we’re the first people to bring Akon to Goma, then fine. But to say they’re doing this for the sake of peace? It’s patronising.” There are scores of arts-based peace-building initiatives in Goma. TheAmani Festival (Amani means peace in Kiswahili) in February attracted a crowd of 5,000, according to UN staff who helped organise it, roughly the number that turned out to see Akon. “People perceive it as an arrogant move to say, ‘we’re the first ones to come in here and do something for peace,’” the UN worker said. [caption id="attachment_12337" align="alignright" width="300"] 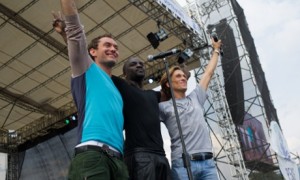 Jude Law, Akon and Jeremy Gilley (l-r) wrap up the peace concert on stage. Photograph: Phil Moore/AFP/Getty Images[/caption] To deliver their work, Peace One Day partners the UN. But UN teams in Goma made it clear from the outset that they would not make any concessions that could have a negative impact on their operations, the source said. The UN’s Congo mission, Monusco, provided police and security for Akon and Law, logistical support and some staff. Peacekeepers built a VIP area and stage, but no troops were moved. The government, however, which is already stretched to the limit trying to secure the region, provided 500 Congolese security forces for the concert, according to the UN source. “Everyone is needed to fight armed groups, and then you take them away to secure a party scene? [The Congolese] are fed up of organisations arriving, announcing something huge, and leaving again. That’s what’s been happening for the last 40 years.” As Akon surfed the heads and hands of elated Congolese (mainly young men) in a large ball, many people suspended their disbelief. But Micheline Mwendike, 29, likened the concert to getting drunk to escape problems. “You forget, but the next day you wake up and it’s the same.” She and other activists unite under an organisation called Lutte pour le Changement and have organised events on Peace Day for the past two years. “Everything is a slogan now,” she says. “I want to make peace with [Rwandan President Paul] Kagame [in reference to his alleged support of an armed rebel group, M23, that occupied swaths of North Kivu between 2012 and 2013], but does he want to open the political space to allow for peace with me? Peace Day should be an opportunity for resolution. We know how to sing and dance. My biggest criticism is the lack of concrete messaging.” Many, however, support the symbolism of the day. Sinza Wolf, 29, a youth leader in Rutshuru, travelled 70km to Goma with 30 others to join a march on Peace Day. They lit candles for lost friends, released doves into the sky, and talked peace. For the previous two Peace Days, he had been living on the other side of an active frontline in rebel territory. “For a long time we couldn’t be here. This year, we are very glad. It’s important for us to see that people are fighting for the youth.” [caption id="attachment_12338" align="alignleft" width="300"] 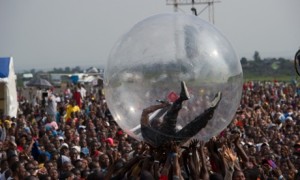 Akon rolls among the crowd in Goma. Photograph: Phil Moore/AFP/Getty Images[/caption] Ray Torres, Monusco head of the Goma office, marched with him. “We’re not naive. We don’t think a march is going to bring peace to North Kivu. But it’s building momentum to make it unacceptable to be supporting or condoning an armed group.” It’s also boosting young people “to go back to their communities and to say, ‘give up your weapons’”, he said. In the VIP area waiting for Akon, Pacifique Boraumzima Buluhukiro, the North Kivu coordinator for Interpeace, said: “It’s a very important day, to attract people’s attention to the meaning and significance of peace – but the biggest job is yet to be done.” *Source theguardian .The International Women’s Media Foundation supported Jessica Hatcher’s reporting from the Democratic Republic of the Congo]]>