The Ebola outbreak has revealed failures in our crises response systems. It has also revealed a disorder of priorities, with governments more interested in business and the elite than in services for the people. We have disaster capitalism on our hands. 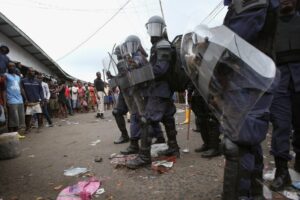 Riot police hold people back at the West Point slum in Monrovia, Liberia. The slum was quarantined following the Ebola outbreak, leading to protests from residents. Photo: John Moore/Getty Images[/caption]

The outbreak of the Ebola virus in West Africa evokes both sadness and introspection for many Africans. The loss of lives is due both to the fact that the virus is incurable as well as to poor health facilities in the areas directly affected. These factors have been compounded by the fact that the citizens affected have limited knowledge about how to prevent the disease.

In Liberia the forced quarantining of residents of some cities have led to demonstrations and riots [the quarantining of the West Point slum was lifted following protests]. President Johnson-Sirleaf has also had to fire government officials who fled their own country for fear of catching the dreaded virus. Elsewhere on the continent, governments have been trying to calm concerned and panicky citizens and reassure them that they are doing everything in their control to prevent any infected persons crossing borders.

Globally there is a narrative that is familiar to many and largely purveyed through the media. This being: the projection of Africa as a place of disease and death. This is partly because the Ebola virus is killing many innocent souls but also because this is how the global West and East prefer to view our continent. It however does not end there. Africa also needs help in stemming the epidemic, and in providing both the medial personnel as well as medicines that are urgently required. So once again Africa is in sadly familiar territory wherein we are unable to respond to crisis that affect us not for lack of will but for lack of capacity and preparedness. The latter two stem largely from the fact that we do not have adequately contextualised knowledge production systems or governments that function conscientiously on behalf of the people they claim to lead.

In considering our lack of knowledge production as well utilisation capacity of the same, it is important to remember that this is not the first time Ebola has affected the continent. The first outbreak, which was officially recorded in then Zaire, now Democratic Republic of the Congo, should have seen us learning from that experience and crafting the right responses. The truth of the matter is that we never took it seriously. Perhaps because Zaire was considered a Conradian backwater.

Where we fast-forward to recent years, the greatest challenge in combating the disease from an African perspective has largely resided in our continually poor medical knowledge and facility infrastructure. This state of affairs has been blamed largely on the lack of resources.

A different and better way to look at it is the lack of prioritisation of health service provision by governments, not only in the West African region but also in most parts of the continent. Add to this the lack of academic freedom and over reliance on foreign medical knowledge production systems, inventions and technology. Moreover, our models of health service provision – because of our wholesale adoption of privatisation and neo-liberal frameworks – have now become the preserve of those in upper echelons of society. Thus a government can quarantine those in poor, crowded places, as has been done in Liberia. So when arguments are raised about how the economic impact of the current epidemic relates to the loss of markets, these ironically miss the essential point that it is because of lack of public health services to poor communities and regions that it has spun out of control. The biggest indictment for our continental failure to manage the current outbreak in a much more concerted and holistic way falls squarely on the shoulders of Africa’s political and business leadership. The political leaders have remained more interested in personal aggrandizement and pandering to de-contextualised economic development models than they have been in the people. The business leaders for their part have taken advantage of these proclivities of the political leaders, joining the comprador bourgeoisie and mimicking with little contextual production or social democratic intent the practices of transnational companies. With this approach by business and the scramble for either a cure or a vaccine, what we are faced with are the ominous prospects of disaster capitalism, where instead of rectifying the actual problem of lack of health service provision, the outbreak will be used to fortify elitist privatised healthcare.
*Source thisisafrica .Takura is a renowned blogger, social, economic and human rights activist based in Harare, Zimbabwe.
]]>