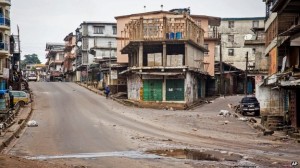 A three-day curfew is under way in Sierra Leone to let health workers find and isolate cases of Ebola, in order to halt the spread of the disease.

Many people have been reluctant to seek medical treatment for Ebola, fearing that diagnosis might mean death as there is no proven cure. A team of 30,000 people is going house-to-house to find those infected and distribute soap. But critics say the lockdown will damage public trust in doctors. Meanwhile in neighbouring Guinea, the bodies of eight missing health workers and journalists involved in the Ebola campaign have been found. A government spokesman said some of the bodies had been recovered from a septic tank in the village of Wome. The team had been attacked by villagers on Tuesday. Guinea’s prime minister said an investigation was under way, and vowed to catch the perpetrators of the “heinous murders”. Correspondents say many villagers are suspicious of official attempts to combat the disease and the incident illustrates the difficulties health workers face. Sierra Leone is one of the countries worst hit by West Africa’s Ebola outbreak, with more than 550 victims among the 2,600 deaths so far recorded. In the capital, Freetown, normally bustling streets were quiet, with police guarding roadblocks. ‘Extraordinary measures’ During the curfew, 30,000 volunteers will look for people infected with Ebola, or bodies, which are especially contagious. They will hand out bars of soap and information on preventing infection. Officials say the teams will not enter people’s homes but will call emergency services to deal with patients or bodies. Volunteers will mark each house with a sticker after they have visited it, reports say. 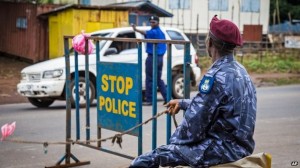 Police roadblocks have been set up to enforce the curfew[/caption] Freetown resident Christiana Thomas told the BBC: “People are afraid of going to the hospital because everyone who goes there is tested for Ebola.” Another resident in Kenema, in the east of the country, told the BBC families were struggling because the price of food had gone up. In the hours leading up to Sierra Leone’s lockdown, there was traffic gridlock in Freetown as people stocked up on food and essentials. Cities and towns across the country were quiet without the usual early morning Muslim call to prayer and the cacophony of vehicles and motorbikes that people wake up to here. Thousands of volunteers and health workers have assembled at designated centres across Sierra Leone and started moving into homes. But they had to wait for hours before their kit – soaps and flyers – could reach them. MP Claude Kamanda, who represents the town of Waterloo near Freetown, told local media that all the health centres there were closed, hours after the health workers and volunteers were meant to assemble for deployment to homes. He complained that the delays were not helping the campaign. The UN Security Council on Thursday declared the outbreak a “threat to international peace” and called on states to provide more resources to combat it. [caption id="attachment_12173" align="alignleft" width="300"] 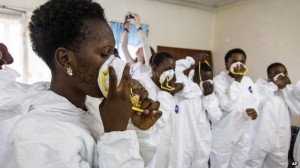 Volunteers will visit each home to test people for the virus[/caption] Meanwhile, the US military has started work in the Liberian capital Monrovia to establish an air bridge – a link by air transport – to take health workers and supplies to affected countries. The UK has pledged to help build new treatment centres and provide 700 new hospital beds in Sierra Leone, although a majority of the beds could take several months to arrive. Aid workers have welcomed the UK aid but say all of the beds are required immediately, the BBC international development correspondent Mark Doyle reports. Medical charity Medecins Sans Frontieres (MSF) has been strongly critical of the lockdown, arguing that ultimately it will help spread the disease as such measures “end up driving people underground and jeopardising the trust between people and health providers”.