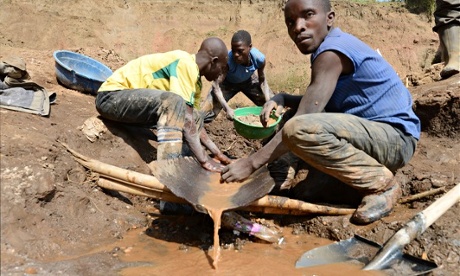 Men separate minerals near Congo’s Mudere mine. Artisanal miners are suffering as a result of attempts to ensure minerals are conflict free. Photograph: Junior D Kannah/AFP/Getty Images[/caption] Legislation that requires firms to trace the supply chains of minerals sourced in the Democratic Republic of the Congo is disrupting people’s livelihoods and creating sources of funding for armed groups. An open letter signed by 70 academics, politicians and civil society professionals (pdf) warns that efforts to block armed groups from selling minerals “risk contributing to, rather than alleviating, the very conflicts [such measures] set out to address”. Under the Dodd-Frank Act (pdf), which was passed in 2010, US companies are required to submit due diligence reports that prove minerals sourced in Congo do not “directly or indirectly finance or benefit armed groups”. Products that meet this requirement are labelled conflict-free. But experts say many Congolese rely on small-scale artisanal mining, which is difficult to track. Legislation aimed at blocking armed groups from receiving mining revenues is harming these subsistence miners, they say. “In my own research, I’m spending a lot of time in mining sites that have been included in the [monitoring] system in north and south Kivu provinces of Congo; and the results in terms of economic development are almost invisible,” said Christoph Vogel, a lecturer at the University of Cologne and co-author of the letter, published online on Wednesday. “A Congolese miner has a lot of difficulty understanding the usefulness of these kind of systems because for him or her the main thing is to earn a few bucks a day just to nourish their families,” said Vogel. “The more you can help them improve labour security in the mines and create better infrastructure, the more you will motivate them to become interested in these clean mineral frameworks.” Passing legislation designed to trace mineral supply chains in Congo has gained popularity as a way of cracking down on armed groups in the region. But legislation targeting rebel insurgencies has “inadvertently incentivised buyers on the international market to pull out of the region altogether and source their minerals elsewhere”, the letter says. “Setting up the required systems and procedures to regularly access and audit thousands of artisanal mining sites in isolated and hard-to-reach locations spread across an area almost twice the size of France would be a challenge for any government,” says the letter. Ben Radley, a PhD researcher at the International Institute of Social Studies in The Hague, said: “In essence, all mining sites were considered guilty before proven innocent, and as there were no traceability or certification systems that conform to the requirements of due diligence back in 2010, they were all forced to either shut down, or move into smuggling across borders where the minerals can then become ‘conflict-free’. I think an increase in smuggling has been the principal effect [of the Dodd-Frank Act], but of course, this is hard to quantify.” Instead of crippling armed groups, legislation has encouraged cross-border smuggling and forced rebels to diversify how they make money. Insurgencies such as M23 have responded to legislation by trading charcoal, marijuana, soap, palm oil and other consumer goods, the letter says. Congo holds almost half of the world’s cobalt reserves, according to theExtractive Industries Transparency Initiative. Minerals and crude oil comprised about 95% of the country’s exports in 2012, it said. Large multinational companies such as Apple and Intel depend on Congolese minerals. Many of these firms have adopted policies in line with transparency legislation, which has limited their ability to buy from subsistence miners. Intel said: “As part of Intel’s commitment to corporate responsibility and respecting human rights in our own operations and in our global supply chain, it is Intel’s goal to use tantalum, tin, tungsten and gold in our products that do not directly or indirectly finance or benefit armed groups in the DRC or adjoining countries while continuing to support responsible mineral sourcing in the region.” *Source theguardian]]>