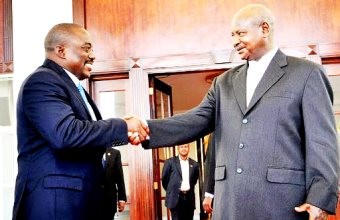 Peace in the Great Lakes region of Africa is way overdue[/caption] Relations between Uganda and the Democratic Republic of Congo are entering a new era of proactive engagement that could bring stability to an insecurity-prone region that is on the cusp of a major oil boom. Top diplomats from the two countries met in Kinshasa from August 23-27 under the Joint Permanent Commission (JPC) set-up to discuss co-operation in politics, diplomacy and law; defence and security; and economics, finance and infrastructure development. In particular, they sought to find agreement on how to settle the $10 billion fine the International Court of Justice slapped on Uganda in 2005 over its military incursions into Congo and the subsequent plunder of its resources; resurveying and demarcation of their common border that has sparked deadly military clashes fanned by the discovery of oil in the area. They also sought ways to manage cross-border natural resources like minerals and hydrocarbons; co-operate on other cross-border trade related issues like harmonising taxes, Customs and standards; establishing a regional trade centre; and ratifying the treaty on tourism and the environment. “We had broken diplomatic relations with DR Congo, which were restored recently because DR Congo has worked extremely hard especially in eliminating the Allied Democratic Forces (ADF) and National Army for the Liberation of Uganda (NALU) rebels. “We were encouraged by its political willingness to deal with other common problems and so this gave us the impetus to re-establish relations,” said Okello Oryem, Uganda’s acting Foreign Affairs Minister who headed the delegation to Kinshasa. “The JPC is only the beginning of the steady normalisation and consolidation of bilateral relations and co-operation on matters of mutual interest to both countries as we look to grow and strengthen our economies and integrate our people,” added Mr Oryem. Kampala and Kinshasa’s rapprochement comes in the context of a fast improving security landscape, owing mainly to the latter’s redoubled military efforts to pacify the east of the country given the discovery of significant oil reserves there. Kampala meanwhile is pressing ahead with development of its own confirmed oil deposits totalling 6.5 billion barrels. Both finds are located in the shared Albertine Graben. For DR Congo, the early word is that if its reserves, which analysis of 3D seismic surveys estimated at around three billion barrels, are proven commercially viable, it could increase the country’s GDP by 25 per cent. In Uganda, current projections put petroleum receipts at $3.3 billion annually — equivalent to half of the country’s current budget — at peak production of 200,000 barrels per day (bpd) expected anywhere from 2025 to 2035. “The confirmation of oil on the other side of Lake Albert would mean that Kampala and Kinshasa would have every reason to work together. It would make more sense for the DR Congo oil to pass through Uganda to the oil refineries on the Indian Ocean considering that the distance to the oil refineries on the Atlantic Ocean is extremely long,” said Kasaija Phillip Apuuli, an associate professor at the Addis Ababa-based Institute for Security Studies and an expert on the Great Lakes region. “Eventually, when Uganda builds its own refinery, it would make sense for it to refine the DR Congo oil too. I would imagine by the time the Kinshasa starts producing oil for commercial purposes, Uganda will have already established its oil infrastructure. So, I think the two countries have a lot to gain as they go about promoting their oil economy,” added Prof Kasaija. According to a July 2012 International Crisis Group report, Kampala had previously also expressed an interest for Congolese oil to be transported and refined in Uganda given the costs involved. Kinshasa’s policy makers interpreted this as an energy dependency risk. They proposed, instead, the construction of a 6,500km-long pipeline to transport the oil westwards to the Atlantic coastline, which would only be feasible if massive oil reserves were discovered in the Central Basin as well. That thinking is now changing. The two countries are in the process of forming committees that will begin to meet within three months to discuss mechanisms of how to exploit their oil resources either through exporting through the pipeline or refining in Uganda’s refinery, whose first phase — with capacity to refine 30,000 bpd — could be ready by 2018. This is one of the major outcomes of the August 23-27 meeting in Kinshasa, alongside resurveying and demarcating the common border. The Kinshasa meeting recalled the 2007 Ngurdoto Agreement that the Ugandan and DR Congo presidents entered into to stave off full-scale hostilities between their countries over the imprecise position of their common border. Kinshasa owes its progress against the so-called negative forces in the east of the country to the UN Security Council’s decision to establish a first of its kind fighting force — the Forces Intervention Brigade — that supplied vital backup in the destruction of the ADF camps in February. Crucially important was the far-reaching Peace, Security and Co-operation Framework for the DR Congo and the region that all countries in the Great Lakes region signed in February 2013. It called for “strengthening support to the government [of DR Congo] to enable it to address security challenges and extend state authority.” “In the same context, the UN has told all the remaining negative forces notably the FDLR (Democratic Forces for the Liberation of Rwanda) and others to disarm within six months. So, for Kampala, if the DR Congo government can deal with the ADF threat, that definitely will go a long way in establishing a basis to improve relations with Kinshasa,” said Prof Kasaija. *Source africanglobe  ]]>