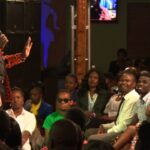 Daniel “Churchill” Ndambuki is a popular Kenyan comic who brings joy and laughter into people’s lives each week with his self-titled variety show. For all you comedy fans, he has chosen five emerging comics from the continent to keep an eye on — they are going to be big![/caption] Daniel Ndambuki might today be one of Kenya’s top comedians, having the crowd in stitches every time he performs, but things were quite different when he first took to the stage. In fact, Ndambuki’s debut performance was so bad that he had to be stopped straight away. “My first joke … they switched off the mic,” recalls Ndambuki, who is better known by his stage name “Churchill”. “It was too boring,” he admits laughingly, “even [to] myself.   https://www.youtube.com/watch?v=EN_V9XQm8Ks “We left the stage and we promised ourselves never to do comedy again, but I went back and with practice and a lot of encouragement, we just found ourselves getting addicted to the stage and that’s exactly what we are doing up until now.” ‘Next Chris Rock’ As the old saying goes, if at first you don’t succeed, try, try again. And to Churchill’s credit, he did and today, thanks to his hard work and determination, he is at the helm of two of Kenya’s biggest comedy shows: Churchill Live and Churchill Raw. The first one is more of a magazine show, with several high-profile guests, whilst the latter serves as a platform for up-and-coming performers to showcase their talents. To find the best entertainers, Churchill auditions a group of comedians, and the cream of the crop goes on to perform before a live audience later that day. “There is nothing as exciting as being a pioneer for a big dream, not only for one country, but the whole continent and creating history and influencers — it’s the most amazing thing,” says Churchill. “With the talent that you see coming up on the stage every day, in the next five years you might be sure, it’s a matter of time before you see a Chris Rock or a Steve Harvey coming from the academy and that would be the dream,” he muses. Tips to tickle you [caption id="attachment_11594" align="alignright" width="150"] 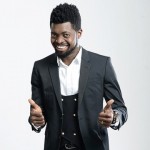 Basketmouth has quite the social media following, with over one million Facebook likes and over 550,000 Twitter followers. Stand-up is his speciality, but he uploads the occasional sketch to his YouTube too.[/caption] But what does it take to succeed in the business of making people laugh? For Churchill, the secret lies with crafting jokes that everyone can relate to. “The most unique thing is being able to make a very intelligent person and the ordinary person get the joke at the same time otherwise you will lose,” he advises. “It is not easy,” he adds. “Humor is based on current issues and observation and just characters,” continues the seasoned comic, “so it’s a whole journey seven days a week; you have to keep on doing it, again and again. “Comedy is not easy, it’s really more like a calling. If someone has that talent, the best you can do as a parent is to encourage that person.”   https://www.youtube.com/watch?v=u2FJAGOrh5o   More than just a comedian, Churchill is today focused on growing the next generation of comic talent in Kenya and beyond. CNN’s African Voices asked the seasoned comic to name some of his continent’s best comics to keep an eye on. Click through the gallery above to find out Churchill’s favorite African comedians and check out the video below to learn more about his story. *Source CNN]]>